(All quotes are from works either in the public domain or with full-texts available through creative commons. Links to attributions for all can be found at the end of the post.)

Since I started volunteering at the University of South Carolina's Irvin Department of Rare Books & Special Collections, I've seen more cool books than I can count. The following are just a few of the treasures I've come across recently. 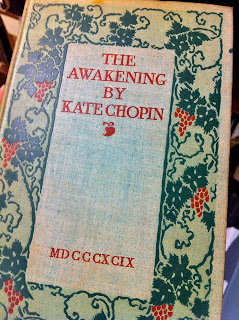 Here's a passage from The Awakening, one of my favorite classic American female authored novels (it's hard to pick which passage to post as almost every page of my copy is marked up, but this one seems to embody the spirit of the story):

"A certain light was beginning to dawn dimly within her--the light which, showing the way, forbids it. At that early period it served but to bewilder her. It moved her to dreams, to thoughtfulness, to the shadowy anguish which had overcome her the midnight when she had abandoned herself to tears. In short, Mrs. Pontellier was beginning to realize her position in the universe as a human being, and to recognize her relations as an individual to the world within and about her." 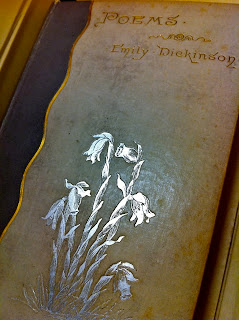 Special Collections holds many copies of Dickinson's work, but I thought this one was particularly pretty.  Here are two of her poems that have stayed with me throughout the years, the second being the only full poem I have in memory. I know it's short, but give me a break, I've got almost no memory for text at all:

Hope
Hope is the thing with feathers
That perches in the soul,
And sings the tune without the words,
And never stops at all,

And sweetest in the gale is heard;
And sore must be the storm
That could abash the little bird
That kept so many warm.

I've heard it in the chillest land,
And on the strangest sea;
Yet, never, in extremity,
It asked a crumb of me.

I never spoke with God,
Nor visited in heaven;
Yet certain am I of the spot
As if the chart were given. 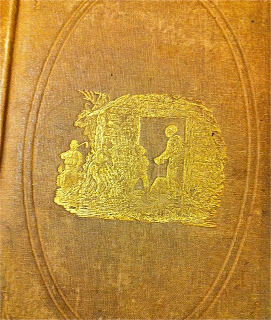 This beautiful old copy of Uncle Tom's Cabin graces the shelves as well. I wouldn't call this story one of my favorites. But I'll definitely call it one of the most affecting I've read. Here's a painfully modern sounding excerpt from its 40th chapter:

"Scenes of blood and cruelty are shocking to our ear and heart. What man has nerve to do, man has not nerve to hear. What brother-man and brother-Christian must suffer, cannot be told us, even in our secret chamber, it so harrows up the soul! And yet, oh my country! these things are done under the shadow of thy laws! O Christ! Thy church sees them, almost in silence!" 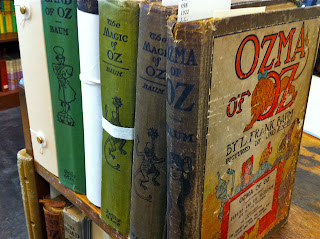 It's shameful, but I've not read any of the Oz series. Don't shun me. I'll get around to it. I did find a pretty copy of The Wonder City of Oz for a buck at an antique store and will read it someday. Or I could just browse one of the many copies at the library, like this early edition. 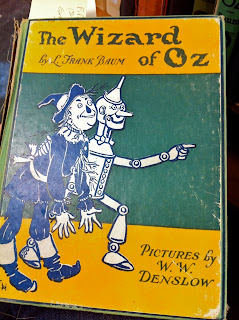 "'No one knows it but you four--and myself,' replied Oz. 'I have fooled everyone so long that I thought I should never be found out. It was a great mistake my ever letting you into the Throne Room. Usually I will not see even my subjects, and so they believe I am something terrible.'" 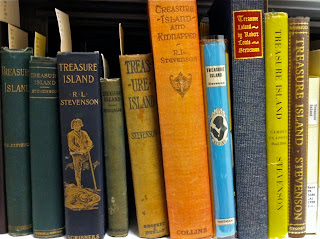 Ever read Treasure Island? Sometimes I wonder about all of those titles out there I supposedly should have read--you know, the ones you're supposed to read for school or the ones that are really thick and intimidating and have a billion different printings and editions, the ones you know the titles of but have no idea what they're about. I used to think of Treasure Island like that until I read it, and now I'm suspicious that all the others I'm supposed to have read will be just as interesting. How will I ever get around to reading them all?

"'Come, now, march,' interrupted he; and I never heard a voice so cruel, and cold, and ugly as that blind man's. It cowed me more than the pain, and I began to obey him at once, walking straight in at the door and towards the parlour, where our sick old buccaneer was sitting, dazed with rum. The blind man clung close to me, holding me in one iron fist and leaning almost more of his weight on me than I could carry. 'Lead me straight up to him, and when I'm in view, cry out, 'Here's a friend for you, Bill.' If you don't, I'll do this,' and with that he gave me a twitch that I thought would have made me faint. Between this and that, I was so utterly terrified of the blind beggar that I forgot my terror of the captain, and as I opened the parlour door, cried out the words he had ordered in a trembling voice.'" 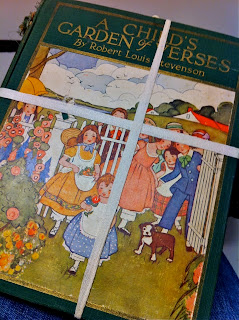 Just down from Treasure Island on the shelves is Stevenson's A Child's Garden of Verses. I read through the verses for the first time this past summer while I was at school. They were very calming just before bed, and the version I had with me, illustrated by Charles Robinson, has beautiful engraving style illustrations throughout. Here's an appropriate seasonal verse for a day like today:

Autumn Fires
In the other gardens
And all up the vale,
From the autumn bonfires
See the smoke trail!

Pleasant summer over
And all the summer flowers,
The red fire blazes,
The grey smoke towers.

Sing a song of seasons!
Something bright in all!
Flowers in the summer,
Fires in the fall! 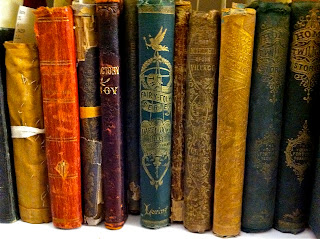 There are tons more old and pretty and lovely books at the library. I encourage you, though this is going to sound very ironic indeed, to get up from your computer, away from your television, off your phone, and down to the library. There's something about holding a book and flipping its pages that an e-reader can't give you. It's different. Not good or bad. Just--different.

Who am I kidding--I hate Kindles and Nooks, and I refuse to read a book on my iPhone even if it is an interactive version of Alice, and should I ever replace my sweet old copies with electronic ones, dig a hole and bury me alive.

Oh, and what does this have to do with children's literature? It's a good question. An even better question would be--What makes a book a children's book? I'm hardly even qualified to ask the question, so I certainly won't attempt to answer it. However, it's fair enough to say that the things I've included on this list could be read and enjoyed by children, whether they were written for children or not. 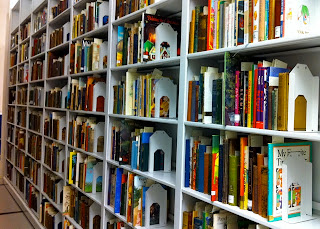