I've been trying today to make a connection between Robert Burns and children's literature since that's what this blog aims to be about. Though I don't like to put literature into rigid categories, I do think his writings with heavy dialect would be inaccessible to children who don't have someone to help them along. And though there are plenty of biographies for children about his life and writings, I didn't find an overwhelming number of books that make his actual poems and songs accessible.

Which is a shame. Because children connect with sounds and rhythm and images, not necessarily meaning. They don't actually have to understand a thing to experience it on some level. Take Mother Goose for example. Most of the nursery rhymes I grew up on have yet to make any sense to me. But it didn't matter because there was a rhythm, something memorable, a song, and what I brought away were images. It never occurred to me that a dish running away with a spoon didn't make sense because I was a kid and so it did make sense. Or consider the sing-song rhymes used in everyday play. I didn't have any idea I was being morbid by singing ring around the rosy, but it didn't matter. It was all for play, as well it should have been. It's disproportionate, the number of living years humans spend worrying about grown-up things, so if a child wants to spin in circles while chanting disturbing rhymes, just leave her the hell alone! No, in fact, I've got one better. Give her more rhymes and rhythms to add to her arsenal. Perhaps starting with this one. The dialect isn't as heavy as some of the others, it's not political, and the sounds are sweet and pretty. Trust me, she'll love it (and if you get really brave, you can learn the tune and teach her to sing it):

As fair art thou, my bonnie lass,
So deep in luve am I:
And I will luve thee still, my dear,
'Till a' the seas gang dry.

'Till a' the seas gang dry, my dear,
And the rocks melt wi' the sun:
I will luve thee still, my dear,
While the sands o' life shall run.

For a more scholarly connection between Burns and children's literature, read this from the National Library of Scotland. Then think back to the fairy and folk tales from your own childhood, the wild imagery, the strange characters, the unexpected twists, the heroes and villains--if your childhood was anything like mine, those became the foundation all other stories would rest on. 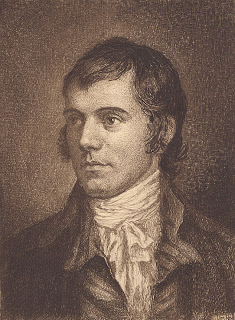