Almost there now! Tomorrow is the last post, then Tuesday is the supper.

So. Why celebrate Robert Burns?


That's a personal question, really. I suppose everyone would have a different answer. Some because of his works, some because of their ancestry, some because they like an excuse to drink whisky and wear a kilt. Whatever their reasons, I can tell you mine. From what I've learned in this short week (speaking of which, I knew practically nothing before this week, so this was never meant to be an academic pursuit, just a pursuit of pleasure, which isn't to say academics and pleasure are mutually exclusive, but which is to say don't quote me on anything without looking it up first for yourself), Burns seems to have been thoughtful, approachable, and flawed. He knew what it meant to be lovesick. He died young but left his mark by sharing his heart through the most powerful means--those that came naturally to him. He was a successful writer but still had to work a day job to make his way. He longed for adventure but knew how to see and appreciate his immediate situation. And his brief life was full of what some might call mistakes. In short, he's the kind of guy I'd have liked to have as a friend. In that case, why not commemorate? People lined the streets to mourn him at his funeral. Countless have been celebrating his life since before it ended. And though countless people in agreement can often be a bad thing, this time it isn't. When the people come together for something good, it's time to take notice. 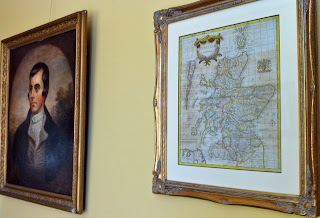 So, then. How does one celebrate Robert Burns?
Any way one likes. But there are some pretty rigid traditions you can follow if you choose to. Jonathan and I have chosen to use the rigid traditions as a loose guide and make the night our own (especially since authentic haggis isn't legal in the states...yet). We considered going to an official Burns Night celebration, but to my surprise, the big ones within driving distance are all black-tie events. And they're fairly expensive. I don't have much interest in going to a Burns Night where Burns himself wouldn't be admitted, though I don't necessarily disparage others for going. I learned from a Burns expert this week that the formality seems to be a regional response. Somehow, though I'd imagine the South to be the place where the most relaxed celebrations could be found, they've become formal events. I suspect what some people call Old South money to be behind it (you know, big plantations, southern belles, all of that), as well as the exclusivity of some of the regions' Burns clubs (some are for men only and many are just for people with documented Scottish ancestry), but I can't be sure. Apparently, if you want to find a more farmerly highlander style gathering, you have to have one of your own or find a small group of people who've done the same. Sadly, we don't know any of those people, so we've decided to have an intimate little feastie with just the two of us. Perhaps if it goes well we'll invite others next year.
The disadvantage of a small gathering is that much of the ceremony is lost...no piping in of the guests or the haggis, no lovely accents for our readings, no kilted revelers spinning around the room to live music, no grand immortal memory. The advantage is that Jonathan doesn't have to rent a tux and we don't have to feel that awkward tension of sitting at a table full of strangers. More than that, we can decide what's most important to us and make the night personal. And when it comes to what's important, I tend to agree with Burns: