Sure, I shop at big chain bookstores once in a while. They've got really good pumpkin cheesecake in the cafe in the fall. And they have lots of pretty cards and stationary. And bookmarks. And most any popular book you're looking for. But there are at least three very important things the big chains don't have that independent bookstores do:

#1 - One of a kind, hard to find, out of print, international, local interest, like-new, obscure, signed, and self-published books

When you walk into one of the mammoth chain bookstores (otherwise known as McBookstores), you're looking at a room full of books a group of corporate buyers thought would sell. That doesn't mean all of them will, nor does it mean there aren't some fantastic stories on the shelves, but it does mean the decisions made were based on money, not necessarily on what a group of executives deemed to be valuable literature (this is also true of some publishing houses).

When you walk into an indie bookshop, you're looking at a room full of books the owner and his/her colleagues chose. Don't get me wrong--they often have to think about profits in order to keep their doors open. But at least IT (yes, the slimy brain thing from A Wrinkle in Time) didn't choose the stock, so you're guaranteed a unique experience at each store. Plus, part of the money you spend goes to the owner and the local community instead of being used to get the brain a new cushy pillow to sit on. Lots of times, you find the same books in an independent shop as you will in IT's store, like the ones below from Poor Richard's Booksellers in Easley, South Carolina. By buying new books indie style, you'll be supporting local business. (Though, if you really wanna save money and natural resources, you could always just go to the library.) 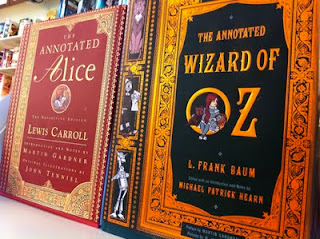 You can also find like-new books in indie shops if they sell used. Like this beautifully illustrated copy of Pullman's take on the Puss in Boots tale for just $5 from McDowell's Emporium in Anderson, South Carolina. IT wants almost $14 for the same title and lacks that extra little bit of love and wear that any good used book offers. 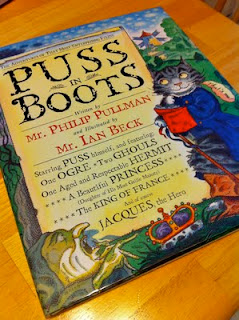 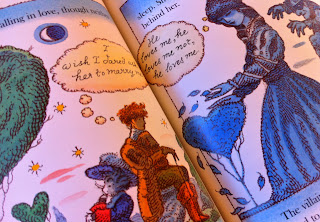 If you find a shop that sells old used books, it's also possible to buy something no one else in the world has a copy of. And you might even get it for a measly twenty bucks like I did. Below is an autograph book I found at Noah's Ark Book Attic in Tryon, North Carolina. Originally full of blank pages, it was used kind of like a school annual is used today. Friends and classmates of the book's owner signed their names inside along with short poems or messages to be remembered by.
There were two books in this set, one from the owner's days in high school and one from college. I couldn't afford both, so I chose the one from his younger years. Autograph books can be found at antique stores as well. If you're lucky, you'll also find little bits of memorabilia inside like the cut-out of the black cat. In the book from the owner's college years, someone had pressed a four-leafed clover between two pages, and it was still intact these 120 years later. Some have elaborate illustrations drawn in as well. These are one of a kind, and they can be very affordable, so if you come across one, buy it. It'll probably cost you less than any number of new hardbacks from your local McBookstore. 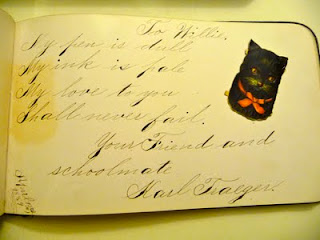 If you shop indie, you're likely to find titles IT can't afford to stock, or at least titles IT thinks it can't afford to stock (the scope of the human brain is obviously largely unappreciated by IT who apparently uses things like statistics and percentages and popular opinion to make decisions). Below are just a few of my recently found treasures. Some I bought, and some I only took pictures of to remember for later. I did buy this beautifully bound and illustrated $7 book of Tennyson's poems printed in 1888. I found it at The Village Book Shoppe in Tryon, North Carolina. 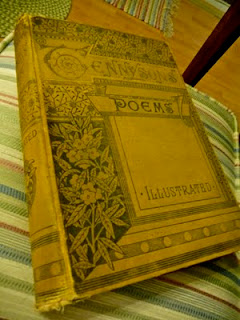 This late 70s printing of Kate Greenaway's Book of Games is in great condition and was only $5 at McDowell's Emporium. 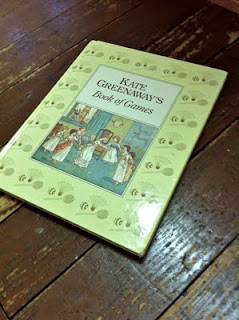 I couldn't afford this one from Noah's Ark, but I was really pleased to flip through its pages. It's a first American edition of The Zankiwank & the Bletherwitch, notable partly for its Arthur Rackham illustrations as seen on the title page below. 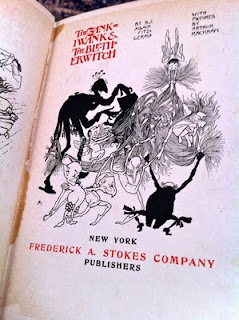 I didn't buy this one from the Emporium, but I wish I had. The text is available online if you're curious about the powers a generous person can hold after death (if said person plans ahead and if those left behind are patient). But online, you miss out on the woodcuts. 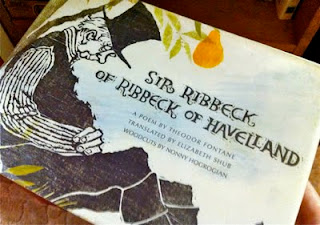 I did get this from the Emporium for just $2! How about that late 70s cover design? Mushroom houses in electric blue on a field of blindingly green grass? And stories about gnomes and goblins and pixies? Yes, please. 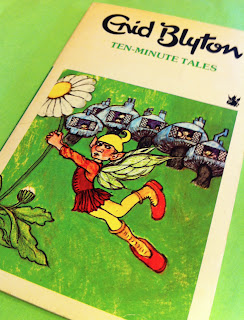 I even lucked out and found the following. It's hand-colored and calls itself the "Twentyfirst Edition...After the ninetieth edition" of the German language version. All pages are intact. And for only $18 at a Hendersonville, North Carolina antique shop! I paid for it quietly so the person behind the counter wouldn't realize what she was getting rid of for such a small price. Don't let the cover fool you. It has neither funny pictures nor pretty stories. But then, according to Peter Hunt in An Introduction to Children's Literature, the book is a satire of cautionary tales. 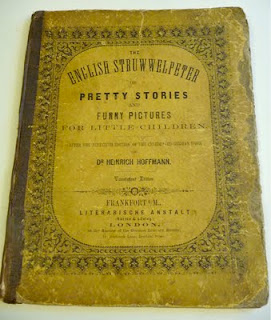 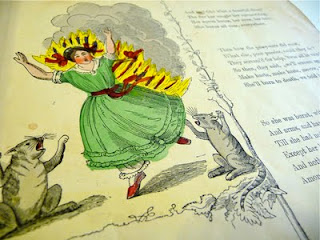 Sure, you can get most of the books above (and more) online. You can even get free shipping from some places. But you can't get the feel of walking into a little downtown shop with retrofitted shelves and cat hair and old smelly chairs and stacks of unshelved books in the corner and an owner on site who can tell you where the book lived before it came to his shop and lamps for lighting and low ceilings and homegrown reading groups and homegrown readings. You can't spend hours scanning shelves for rare treasures or have fascinating conversations with the owner about things like the fragile nature of vellum binding or sit on the back porch while men with beards smoke cigars. You can't walk out with a paperback of Anne of Green Gables under one arm and an antique typewriter under the other. You can't have the place all to yourself. And, perhaps most importantly, you can't smell the thing before you buy it. The sense of smell, in the case of buying books, is essential. 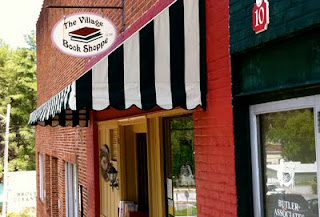 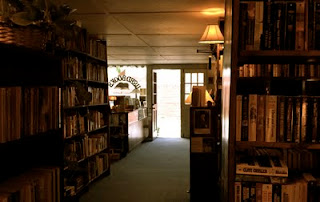 The Book Shelf in Tryon: 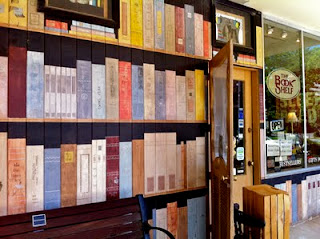 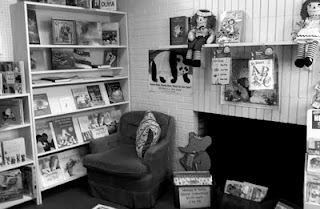 City Lights in Sylva, North Carolina, where I recently spent a lovely evening listening to a dear friend read from her new book, surrounded by friends and family and a mountainy atmosphere: 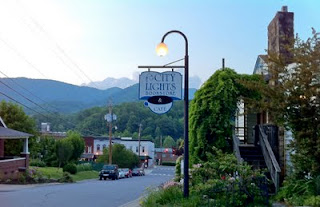 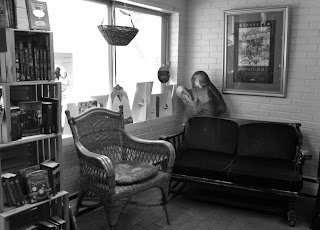 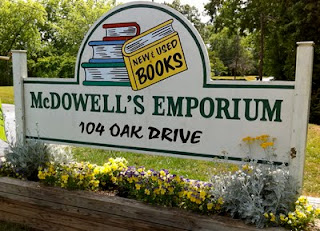 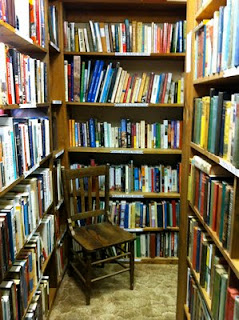 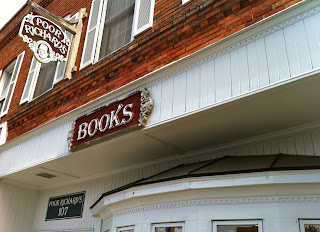 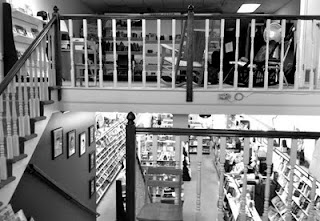 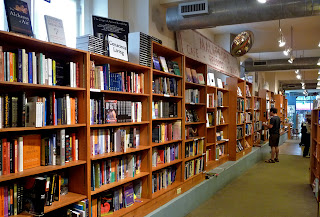 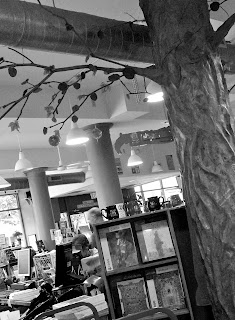 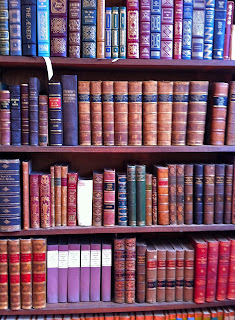 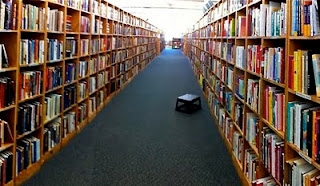 You will never be minding your own business down a side aisle in a McBookstore only to be interrupted by the meow of a cat who sounds like he's smoked one pack too many and who is bordering on obesity. (I will continue to use the pronoun "who" in reference to a cat instead of "that" even though the Chicago Manual would probably disagree. Anyone who's met a cat knows a cat is never a that and always a who or a whom.) Having your book browsing interrupted by a meow is a pleasure only to be had in independently owned bookstores. These cats are often spoiled, demanding, shedding, slightly oily, very vocal, and are surprisingly never named something literarily satisfying like Watson or Hester or Phineas. And yet, I love them anyway. Why? Because felines, in their quirkiness and pride and irreverence, embody the very spirit of the independent bookshop. They do what they want, when they want, and answer to no one.
This sweet looking cat who lives at Noah's Ark weighs in at about 20 pounds. He's the second most demanding cat I've ever met and is surprisingly agile. If you find yourself at Noah's Ark, my advice is that you not turn your back on him, however sweet he looks.

The lazy cat below lives and reigns at McDowell's Emporium. He's got a sore foot but still manages to be right in the way of whatever section of books you happen to be looking at, meowing his smoker's meow and rubbing against your leg till your jeans are furry. (It's my own fault. I made eye contact and took his picture and said, "Here, kitty.") 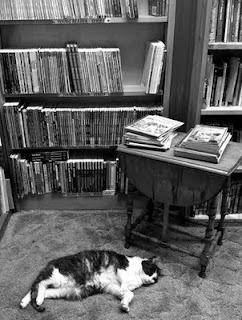 These are just a few of the nice things about your local indie bookshop. Learn more at ABA or IndieBound where you can search for shops near you if you're in the US. Read more about local bookshops in the UK and search for locations here and here.
Posted by Robin at 4:43 PM