"Her impatience for this second letter was as well rewarded as impatience generally is."
Jane Austen
While unpacking boxes this week for what will soon be my writing room (very exciting even if the room shouldn't make much difference), I found a sleeve of stamps. Some have flags on them, others have illustrations of journalists, and one has a drawing of a kestrel. But I've got no use for stamps now. I write letters through email. Our bills are paid online. If I must mail something, I take it to the post office where they print out a sticker with the postage paid. It's all very convenient. Emails can be really lovely--they are made up of words after all. A few of the most treasured letters I'll ever receive have been through email, and a single paragraph in an email I got recently put all my prose to shame.

But there's something about a handwritten letter too. Call me romantic, but with paper and ink, there's the wait. There's the slant of each word. The smell of the paper. The time the author put into writing and stamping and walking to the mailbox and putting up the flag. The opening of the box to find your name and the expectation of what's inside. There's the possibility for mistakes. And the permanence. I don't mean permanence in time. An electronic letter can obviously outlast paper. I mean the permanence of ink dyeing fibers.

Just think--what makes Pride and Prejudice so excruciating? Tension. It's all that damned TIME spent waiting and wondering and regretting and hoping in the midst of clever dialog. Even in the BBC version, I'm thinking, "Get ON with it!" It's the most wonderful anxiety. But I'm sure someone has rewritten the story by now--Wickham is quickly recognized as the player he is when the Bennet sisters see all the chesty women posting notes on his Myspace profile. Lydia is easily found because she's constantly checking into her locations on Facebook from her phone (a real disaster since those two truly deserve each other). Pemberley has a virtual tour online, so no need for Elizabeth to visit. (I know you're thinking of the lake scene from the movie. Shame on you.) The hope of something to come between Lizzy and Darcy, and the fear it never will, is settled with a quick text. How everlastingly boring it all sounds.

Though I don't doubt her skill, and I'm sure she'd be up for the challenge, the story just wouldn't be the same without all that waiting and all those letters and the time it took them to reach their destinations. I'm glad Jane was born in the late 17s instead of the 80s. I don't think I could bear the story otherwise. And so, in honor of dear Jane, I shall use up my sleeve of stamps on a few of my favorite people. Till then, some letter-writing quotes from the book. 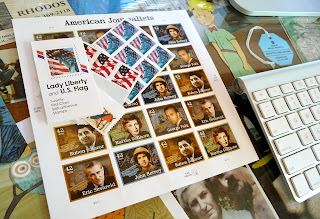 "About a month ago I received this letter; and about a fortnight ago I answered it, for I thought it a case of some delicacy, and requiring early attention. It is from my cousin, Mr. Collins, who, when I am dead, may turn you all out of this house as soon as he pleases."

"Soon after their return, a letter was delivered to Miss Bennet; it came from Netherfield. The envelope contained a sheet of elegant, little, hot-pressed paper, well covered with a lady's fair, flowing hand; and Elizabeth saw her sister's countenance change as she read it."

"With no expectation of pleasure, but with the strongest curiosity, Elizabeth opened the letter, and, to her still increasing wonder, perceived an envelope containing two sheets of letter-paper, written quite through, in a very close hand. The envelope itself was likewise full . . . Mr. Darcy's letter she was in a fair way of soon knowing by heart."

"Since writing the above, dearest Lizzy, something has occurred of a most unexpected and serious nature; but I am afraid of alarming you--be assured that we are all well. What I have to say relates to poor Lydia."

"Every day at Longbourn was now a day of anxiety; but the most anxious part of each was when the post was expected. The arrival of letters was the grand object of every morning's impatience. Through letters, whatever of good or bad was to be told would be communicated."

"Darcy mentioned his letter. 'Did it,' said he, 'did it soon make you think better of me? Did you, on reading it, give any credit to its contents?' She explained what its effect on her had been, and how gradually all her former prejudices had been removed."

"But think no more of the letter. The feelings of the person who wrote, and the person who received it, are now so widely different from what they were then, that every unpleasant circumstance attending it ought to be forgotten. You must learn some of my philosophy. Think only of the past as its remembrance gives you pleasure."

"Dear Sir, I must trouble you once more for congratulations. Elizabeth will soon be the wife of Mr. Darcy. Console Lady Catherine as well as you can. But, if I were you, I would stand by the nephew. He has more to give. Yours sincerely, etc."

All quotes from Project Gutenberg
Posted by Robin at 7:38 PM

The more you write, the more you'll see things with a writerly eye. Just like a photographer sees the world in frames, you'll see it in words. You'll see the parts that make the whole. And things will inspire you--experiences, places, people, conversations, dreams, flavors--all sorts of things.

Lately, I've found nostalgia very inspiring. For example, my husband and I lived in South Carolina for almost seven years in a sweet farmhouse with a quirky personality. We saw our little playful kittens grow to be big lazy cats there. We used to leave the front door open in the evenings to listen to the owls and the frogs and the whippoorwill. We spent many hours making and enjoying meals in the big kitchen. But then one day recently, something took us from that place, and I knew right away that if we ever happen to return, things will be totally different. That quickly, the life I knew there ended. Now I'm left with a funny pulling. It's an excitement for the adventure ahead but a sadness in leaving the known behind. And that is life: beginnings and endings.

That pulling of positives and negatives produces a special energy. A creative energy. It's the perfect time to write. And in this circumstance, the writing process has begun with setting.

It all started while I was cleaning at the old house last week. I looked out the kitchen window and saw Mr. Bluebird sitting proudly on top of his birdhouse. Jonathan and I have been watching Mr. Bluebird and his wife for years. They stay around almost all year and don't mind that their house sits on a crooked pole. I even had to save one of their babies after it took a ride in our cat's mouth one summer, and Jonathan nailed a stovepipe around the pole to avoid future tragedies. Seeing the bluebird on top of his home with his chest out made me think, "There are so many things I'll miss about this place." But only moments before, I'd noticed a patch of mold on the bathroom ceiling and thought, "There are lots of things I'll be glad to leave behind. I wonder what the next place will bring." Upon recognizing this juxtaposition, I immediately stopped cleaning and started brainstorming a list of things I'd miss, like the wild roses that grow on the bank in early summer, and things I wouldn't, like the plethora of ticks in the high grass. The list is substantial now. With a little filling in, it will become a ready-made landscape for a story--the small farm with its grapevines and barns and overgrown pear trees. With its old red outhouse. And the ghost cat. And the cornfield. And on clear, cool nights, Orion looking down on everything.

Some people have a great talent for creating settings and characters and stories from scratch. I don't. I write what I know and don't feel one bit lazy for it. It's very real to me. All I have to do is make it real to you. And real comes through in the details--in the list. In how grass doesn't grow in the front yard, so years of tenants have let the pine needles pile up till there's a soft brown carpet dotted with pine cones. When my character comes walking through some late spring afternoon, deep in thought, I'll know the soft brushy sound and the earthy smell and where the stripes of shade cross his face when the sun sneaks through the trees that line the road. Real comes through in how the ferns that the landlady's mama planted so long ago stand out against the faded red barn like a feathery green collar. In how the wheels of a car rolling over the gravel driveway sound. The setting is there if only I'll listen to the chimes, taste the grapes, smell the magnolia, feel the cold porch under my bare feet, watch the sparks fly through the smoke of an autumn bonfire. I know what every season is like. I know the sound of hail pounding a tin roof. All I have to do is remember and communicate.

And I know the place so well, I can even begin to imagine what it would be like if something happened there that I never actually experienced. Like a tornado. I can guess which trees could be uprooted and how the weathervane would screech. Or if someone broke in. I know where I'd hide or how I'd try to get away. Or if I were my old self back in elementary school and ran away from home and found myself at a little farmhouse with a tin roof and a red barn and a scared, shiny black cat hiding in the cornfield. The setting, that crucial character, is ready to interact with any other players I introduce. It is whole. It is living. Remember and communicate.

Who will live in those foothills? What will they think of the rooster next door crowing at all hours of the night. Will they be angry at the lady across the road who spies on them from behind sheer curtains? Will they fill the house with the music of a peaceful and balanced life or with the dark and heavy tones of turmoil? I don't know yet. But when it comes to telling stories, knowing the setting intimately can be just as important as knowing the characters themselves.
Posted by Robin at 10:07 PM