I should be cleaning my house. The problem is, I started my list of chores by ironing the bedroom curtains. Have you ever ironed curtains? If you want to do something utterly soul-sucking and tedious, I recommend it. Otherwise, get distracted and end up on the screened porch with a stack of books like I did.

The first one I read is a story you know well: Beauty and the Beast. I picked up this copy because the beast looked like a Wild Thing and the girl was only averagely beautiful, but the story was no less troublesome. I won't get into literary theory or anything else I can't explain. There's an abundance of insightful scholarship available on fairy tales without adding uninformed opinions to the conversation. But I can say fairy tales aren't exactly pleasurable reading. Not for me. I usually end up frustrated with the characters and asking questions like: "What the hell is wrong with her dad?" "How come she couldn't turn 'ugly' to suit him instead?" (A Shrek writer might have asked that one.) "Is happily ever after an elaborately layered irony?" Yet I keep coming back because there's much more to fairy tales than what's obvious on the surface (particularly fascinating is their existence to begin with and "what they can do") and because these stories have had the honor of being beautifully illustrated time and again. The artist for this edition is Alan Baker (click pictures below for larger images): 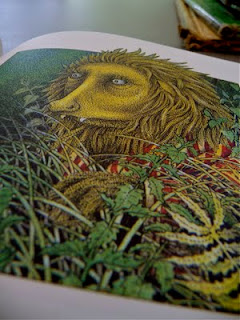 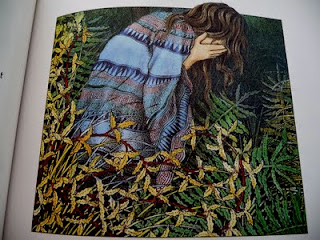 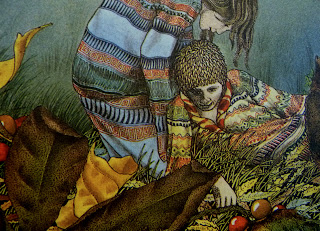 The next book in the stack was Fortunately, by Remy Charlip. How strange and unique and wonderful. The illustrations are surprising and striking and often done in full spreads. The story is an oddly poetic back and forth of fortune and misfortune with a little extra fortune at the end...but then misfortune again just around the corner. You must read it because it's funny and because you'll find comfort in knowing that someone else in the universe has ups and downs too and that with a little luck and a little skill, there's a good chance you'll end up doing alright. Or not. But we're all in the same predicament is the point. (Click here to learn about Charlip and his connection to Hugo Cabret.) 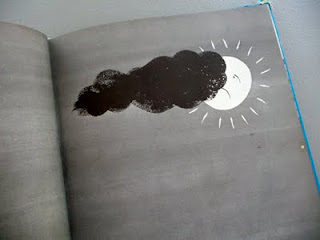 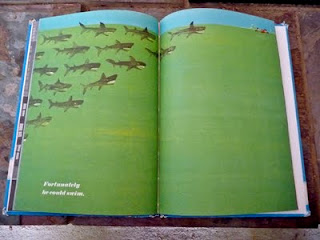 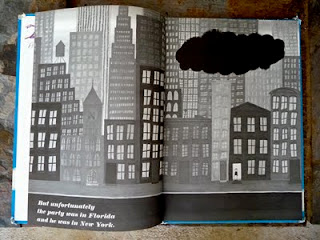 Next up, a lovely story with thoughtful, engaging, imaginative images, written and illustrated by Edward Ardizzone. It's somehow quiet without being sweet and full of action without being void of character. (Ardizzone is officially my new favorite. A copy of this is on its way to my mailbox. Can't wait for its arrival.) The book pictured below is Little Tim and the Brave Sea Captain, the first of many Tim books. It's hard to describe why, perhaps partly due to the blend of straightforward prose and a soft pallet, but this is one of those books not only able to stand the test of time, as it has, but which possibly has the magical combination of things that make a book last forever. 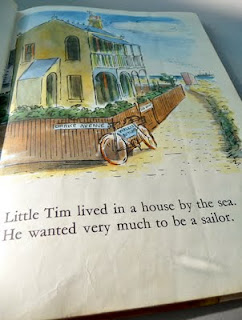 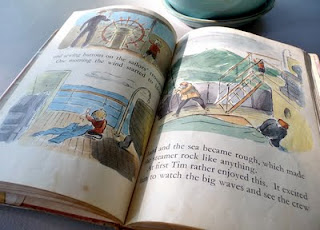 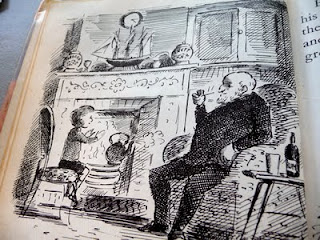 ~*~
If you're interested in learning more about illustrating children's books, check out my dear alma mater, Hollins University. They've recently added a Certificate in Children's Book Illustration to the graduate program. For more info on the instructors, take a look at the work of author/illustrators Ruth Sanderson and Ashley Wolff. Hollins is a lovely place. You'll learn and make friends and wish you could go back even after you've graduated. And you'll get a degree to boot.
Posted by Robin at 11:44 AM

My husband Jonathan is a genius computer guy. He does not, however, repair toasters. Toasters are wonderful pieces of technology. If you use them just right, you can make a Frosted Brown Sugar Cinnamon Pop-Tart even more amazing than it already is. But just because Jonathan can build robust distributed systems doesn't mean he can make your bread brown faster. It's a different kind of technology. That's not to say that being technically minded doesn't connect with other technical things sometimes, it's just to say that one doesn't necessarily follow the other.

The same goes for writing. I write creative nonfiction short stories and children's fiction for older children/young adults. I do not write romantic sci-fi thriller trilogies. I don't write picture books. I don't write copy or journal articles or comic book captions or biographies. They're all different and take different skills.

Marly Youmans is, among many other magical things including being a children's author, a poet. I mean she has the rare gift of being simultaneously poignant and succinct, of not only seeing things in a unique way but being able to communicate her point of view with language. Not every writer has these gifts (these skills, these powers) coupled with the discipline to harness them. Marly does.

Because poetry is a beautiful mystery to me, I recently asked Marly to be my first One Question Interview interviewee, and I'm happy to say she accepted. Thank you, Marly! My one question for Marly was this: Why poetry? Her answer follows.


~*~
WHY POETRY?
To begin in longing.
To fall in love with language.
To make the beautiful as it is made in no other way.
To rejoice. To grieve. To dance my dance with a reader.
To be a reader. To play with Hopkins and Dickinson and Yeats and the Gawain poet and people from other lands and other times.
To be a part of a dream-village of readers and poets that stretches vertically through time and horizontally through space.
To wield the gift. To give a gift.
For mystery.
Because I can, and because I’m good at it, as Flannery O’Connor said about her fiction. She didn’t think she was good at much else, except maybe chickens and peacocks and writing wonderful essays. I don’t think I am good at much else, except making stories and novels and maybe raising three rather unusual children. And the occasional performance…
To knock the tedious weight of post-post-Modernism off my back so I can live in a place where tradition and today marry.
To practice humility before the work of the great masters of poetry.
To be like a magic room that grows bigger on the inside, where it matters.
To sing without a note.
To know the pleasure of streaming-forth words.
To change my life.
To make something like this only different:
THE STARRY FOOL

from The Book of the Red King
In a shivering of bellsThe Fool comes shining, shimmeringUnseen along the moonshine way.Little fir trees sprinkle his pathWith needles, lift their limbs and pointTo the bright whirligigs of stars.And the crack in the Fool's heart is for onceMended, as if without a seam:He shakes his bell-branched staff at the stars.So cold, no one plays the watchman,But in the tower called The SpearThe Red King rules the chiming hour.There he will spy the moon-washed FoolSkittling like a toy top through the city.He will run outside to greet him,Calling, My brother and my self,My mirror, the crack inside my heart!
Reprinted from Mezzo Cammin
The eighth book (and second book of poems) by Marly Youmans is The Throne of Psyche (Mercer University Press, 2011.) Forthcoming books include an epic poem, Thaliad (Montreal, CA: Phoenica Publishing) and A Death at the White Camellia Orphanage (Ferrol Sams Award, Mercer University Press, 2012.) www.marlyyoumans.com www.thepalaceat2.blogspot.com 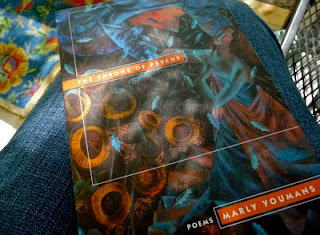 Yesterday was one of those days. The interview I was meant to have was rescheduled. The dog peed on the office chair. I had an argument with Jonathan about cottage cheese in the middle of the grocery store. That kind of day.
That's why today is a Paddington day. You'd think yesterday was, with all the mishaps, but no; I mean it's an Essence of Paddington day.
When I first read A Bear Called Paddington, I thought, "Wow. What an annoying guy." That was just before I headed off on my first great adventure to England. Being in England didn't make me like him more, in case you're wondering. Now I know the problem was that I was too old and organized and uptight to appreciate his outlook on life. He was simply too messy and haphazard for me to put up with. A few children's books are like that, I told myself: they're childlike. 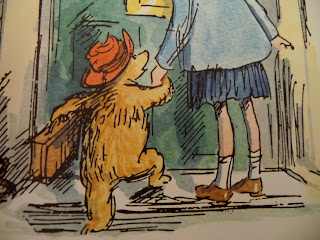 But knowing he's cherished by many and being drawn in again by the artwork of Peggy Fortnum (I love Fred Banbery's too), I decided to give him another chance, and guess what I learned: Paddington isn't actually all that childlike. At least not purely. Sure he's small and accident prone and likes to eat sugary things. But we all know animals are used in children's books for more reasons than their cuteness. And we know that personified creatures don't always represent child characters (enter Ratty and Mole and the White Rabbit and the Caterpillar and Ladybug and Miss Spider and Eeyore and Owl and--) or even childlike circumstances.
No one knows Paddington's age, not even Paddington himself. (This is very convenient for character and plot building possibilities. The character can put on a magic show like a kid at his birthday in one chapter and complain about the price of opera glasses like my dad would in the next.) But he has travelled halfway around the world by himself. And he's a bargaining grocery shopper. He likes to sit around having long chats with his good buddy old Mr. Gruber. And he has "a strong sense of right and wrong." It's up for debate whether or not kids have that sense, but the point is, even though he may come off a bit more like a child because of all the clumsiness and inexperience (more due to his emigrating than his age), I'd say Paddington's leaning more toward the grown-up (if naive) end of things. And we all know that guy, don't we? He's the one we're a teensy bit jealous of. He gets away with everything, mooches off of people who always forgive him, leaves a mess wherever he goes, is incredibly lucky, and, in the words of creator Michael Bond, is "eternally optimistic." But we love him anyway. He's living life how he wants and getting away with it. He is the children's literature version of The Dude. 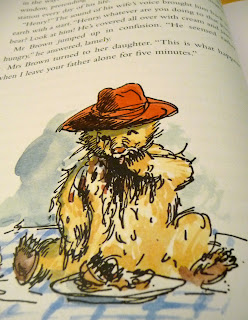 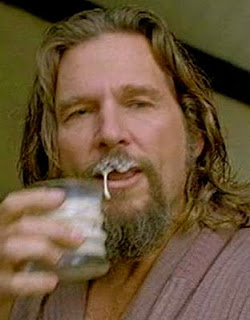 Okay, maybe not quite The Dude. Paddington doesn't have the worldly edge or colorful language. But he's got the laid-back personality and the same talent for getting into trouble and out of it. I can hear The Dude echoing Paddington: "Things are always happening to me [man]. I'm that sort of bear." So, in honor of bears like Paddington and The Dude, and in order to erase the stupidness of yesterday, I decided to embrace my inner slacker and avoid the responsibilities of today by making Paddington's Marmalade Buns as described in Jane Brocket's Turkish Delight & Treasure Hunts instead. 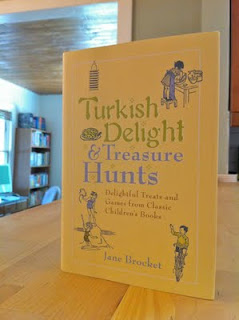 I must say, they are delicious, even if they're more cupcake than bun. It was the perfect way to make up for yesterday, and there's enough left over to make up for tomorrow if it turns out to be ridiculous too. 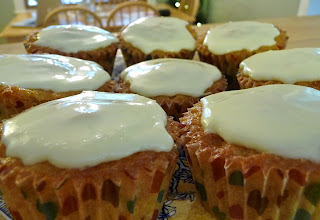 We all need a little Paddington in our lives. We need adventure. We need sugar. We need wonder and naivety and messiness to make up for the continuous insistence that we strive for order and success and perfection.
Screw perfection, friends. Have a marmalade bun instead.
Posted by Robin at 3:06 PM