One summer day nearly twenty-five years ago, I decided to have a picnic. It was hot, so I found a place in the shade under a tree on the edge of the big square of grass in the middle of the neighborhood. Carefully, I unfolded a large piece of cardboard and started on the side closest to me using markers to draw the picnic. I sketched out four beautiful place settings, each with a big plate and a small one and neatly folded napkins. In the middle, I drew fruit and sandwiches and drinks and dessert. It was lovely. I was as happy as can be to pretend it was all real. And in a way, it was.

If you're like me, you remember your childhood as a number of scenes from a story you know by heart. It doesn't seem possible that it was really you, the same you as now. But believe me, it was. No matter how long ago it happened or how much you've changed, that was definitely you. Things are just different now. Some things have been lost and others gained. Perceived security was traded for perceived independence. Innocence given for wisdom. Matchbox cars for used Hondas. Yes, slowly and suddenly, we changed. And the change affected everything.

I've spoken before of my experiences with Alice. If you search this blog, you'll find that one moment I love her stories and another I don't. The most accurate thing would be to say I appreciate them. As a child, Looking-Glass captivated me. As an adult, both of Alice's adventures have frustrated me, even though Wonderland hasn't changed in the last twenty years. Neither has the story. I'm the one who's different. I can't fit through the small door anymore. I'm too busy thinking about the logistics of nursing a pig baby and the deep sadness in waving a handkerchief to a White Knight. I'm busy trying to place the things I'm reading into neat compartments (a silly, almost insulting thing to do with Carroll). 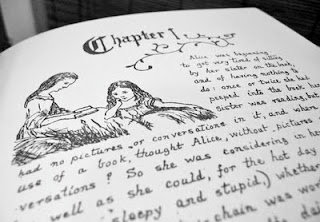 From a facsimile of Carroll's Alice's Adventures Under Ground
The first time I met Alice, I was with my parents at their best friends' house. The grown-ups were smoking over a game of poker in the kitchen, so I was sent to the big cushy recliner to watch television in the living room. Somewhere between the card table and the tube, I came across Through the Looking-Glass. The recliner would have been the perfect place to read, but I seem to remember hiding behind it instead of sitting on it. I don't know how much time passed, but I was totally engrossed (and disappointed) when my parents said it was time to go home.

The real shame isn't that I had to stop reading that night, though that was a pity. No, the real shame is that I didn't go back to the book again until my late 20s, and by that time, it was too late. The glass was just a mirror. 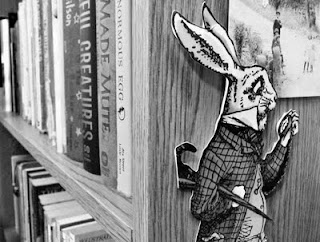 Tenniel's White Rabbit
I'm not trying to say childhood was great and adulthood isn't. Not at all. I wouldn't be a child again. I wouldn't dare be an adolescent again. I don't even want to go back to my 20s. It's wonderful to be able to see more deeply into a text and make subtle connections and understand or guess at implications. And it's even more wonderful to eat chocolate all day if I want or get in the car and go as far as I like with music playing as loud as I want or hop on a plane and go see the sea. I'm just saying: things change. We're only children once. And what a shame, what an utter waste to miss out on wonderlands while you still have the capacity to understand them.


~*~
So she sat on, with closed eyes, and half believed herself in Wonderland, though she knew she had but to open them again, and all would change to dull reality--the grass would be only rustling in the wind, and the pool rippling to the waving of the reeds--the rattling teacups would change to tinkling sheep-bells, and the Queen's shrill cries to the voice of the shepherd boy--and the sneeze of the baby, the shriek of the Gryphon, and all the other queer noises, would change (she knew) to the confused clamour of the busy fam-yard--while the lowing of the cattle in the distance would take the place of the Mock Turtle's heavy sobs.
Lastly, she pictured to herself how this same little sister of hers would, in the after-time, be herself a grown woman; and how she would keep, through all her riper years, the simple and loving heart of her childhood: and how she would gather about her other little children, and make THEIR eyes bright and eager with many a strange tale, perhaps even with the dream of Wonderland of long ago: and how she would feel with all their simple sorrows, and find a pleasure in all their simple joys, remembering her own child-life, and the happy summer days.**
From Alice's Adventures in Wonderland, by Lewis Carroll 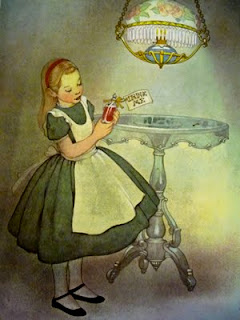 
*Please note that the quotation above is made up of two sentences. Two! Children can handle this.
*Please also note that I'm not implying that this is children's literature or adult literature. It's a story is what it is.
Posted by Robin at 3:08 PM