Jonathan's grandpa passed away this year, and the two things I especially miss are his wise words, always in that Lowcountry drawl, and his promise that he'd pray for me daily by name. When Grandpa died, I didn't cry. I was relieved for him. But I did cry when we visited him at the hospice house where he lay waiting; in that room, like so many others somehow big enough to contain both loss and laughter, it occurred to me suddenly, selfishly, "Who will pray for me now?"

Grandpa was a collector. He had furniture and tractors and sewing machines and books. There were stamp collections and old letters and tools and misplaced parts to everything mechanical a collector might want. There were freezers full of food and prettily curved drinking glasses. And pictures and pictures and pictures. And all manner of miscellany tucked into every corner. A Depression-era mentality filled the basement and the barns and the drawers and the cabinets and the attic, all very Grandpa. He was a dear and good (he'd probably correct me with a scripture reference there) and lovely person.

During our trip to Tennessee for Thanksgiving, I was tasked with sorting through some of Grandma and Grandpa's old books to see if Jonathan and I could adopt any. As you might expect, treasures abounded. I spent part of yesterday sorting the ones we brought home into piles. Here are three of the more interesting titles from the pile of books with pictures.

The first one is a 1920s early reader called Friends to Make, by Gecks, Skinner, and Withers--school supervisor, psychology professor, and education dean, respectively. The book is about two sets of siblings, one set living in the country, the other in the city. They take turns visiting each other and discovering the differences in their landscapes. It's a typical old-school first reader with activities at the end of each chapter, a glossary of vocabulary words, and the underlying message that the world is wide and wild and wonderful but perfectly navigable. I was struck by the illustrations, done by Rhoda Chase and Mabel Betsy Hill, who, perhaps more successfully than those crafting the words, did a lot with a limited palette. 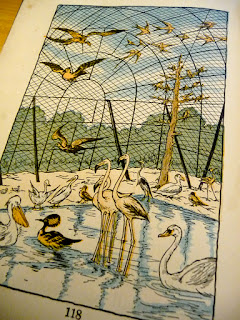 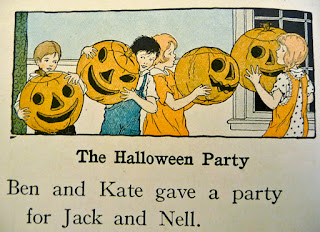 Another book from the collection is The Swans of Ballycastle, by Walter Hackett, illustrated by Bettina (Ehrlich). Because of the colors and style, I first thought the artist was Edward Ardizzone, one of my favorites. According to the biographical information on the de Grummond Collection's site, Bettina was an artist her whole life and came to believe "that children should be given pictures based on the love and observation of nature." The dummy of this book is in the de Grummond Collection. 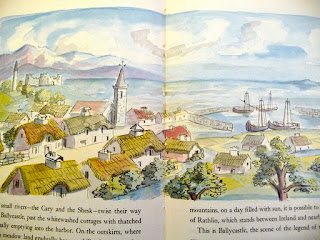 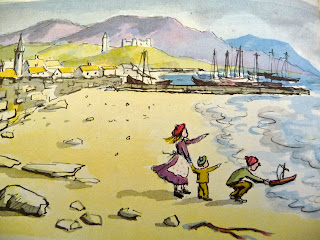 On the surface, the story is a folktale about three children who turn into swans off the shores of an Irish town called Ballycastle after their stepmother throws them out. But I have questions about the symbolism and wonderings about the message. That's why I like this story--because, in the folktale tradition, it says a lot without saying a lot. The tale is based on an Irish legend called The Children of Lir. 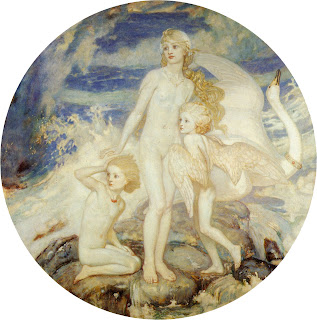 John Duncan's depiction, The Children of Lir
This version seems to be meant for children but is thankfully written in a voice (and printed in a format) that fits the story instead of a narrow audience: "Two small rivers--the Cary and the Shesk--twist their way through Ballycastle, past the whitewashed cottages with thatched roofs, finally emptying into the harbor. On the outskirts, where the green meadow land gradually becomes hills, then mountains, is a tower and beyond that a castle. From this country of hills and mountains, on a day filled with the sun, it is possible to see the Island of Rathlin, which stands between Ireland and nearby Scotland. This is Ballycastle, the scene of the legend of the wandering swans."
The last book that made me stop sorting and start reading was The Golden Book of Quotations, by J. M. and M. J. Cohen. That's because I love quotes and because there are pictures ("'What is the use of a book,' thought Alice..."). And the foreword by Louis Untermeyer is nice too: "This, then, is a book of golden thoughts...Although they are words and ideas which other minds have shaped, they will seem to be your own thoughts, your own way of speaking. All of us need them; we cannot do without them. You, too, will make them yours." 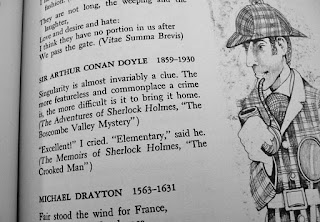 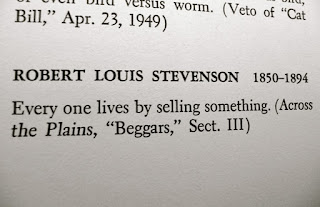