Sometimes someone who's read a book before us will leave behind a trail of interaction in the margins or folded and hidden away between two pages. Sure, you can write notes on your e-reader, and you may even have the technology to handwrite them in so we can see the slant of your personality, but I still can't physically touch the pages you turned. I can't smell the book's age. I can't feel the weight of the whole or see the cracks in the binding. Reading a paper book is like looking into the eyes of the person you love, like touching his hand. An email, a voice on the line, a video chat, a text message--these will never replace a hand on the small of my back or a nervous kiss or a gaze held too long. The physical experience goes beyond receiving the message alone.

As I mentioned in Part 1, these are books we inherited from Jonathan's grandparents. So, though wonderful and valuable treasures have been found by other lucky readers, these are a bit more personal. They were left by people who are gone or very distant, but people personally known by the family. And they're especially lovely for that. Most of the things I found are marginalia and nearly all are in schoolbooks like this copy of The Open Door Language Series Fourth and Fifth Grades: Language Games and Stories. 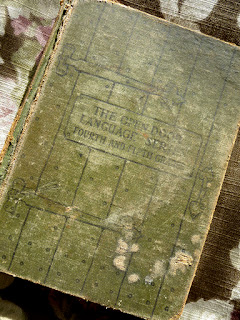 What a great cover. The introduction says the book "endeavors to conserve ability in the use of language which is frequently lost when adult standards are prematurely thrust upon pupils and when all pupils are expected to fit into the same mold . . . it gives him an opportunity to develop his own individual type of mind." Good for you, 1928 schoolbook! I'll never know if it accomplished its goal, but I do know it was a great book for doodling in. And for practicing writing letters to dear friends. 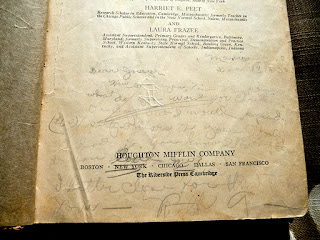 In case you can't read the writing, it says:

We've got a seventh grade edition of the book as well. Inside, Jonathan's grandmother doodled pictures and wrote on almost every page, including this pretty little verse: 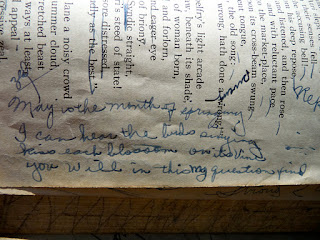 Sweetly romantic with a touch of Mrs. Darling at the end. Or possibly just something for school, but still, when a verse like this is written in messy cursive in a book that smells like the past, it's romantic whatever the person who wrote it really meant.

I can't say why exactly, but this next book is beautiful. 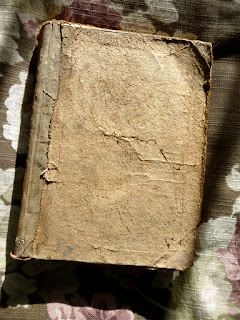 Is it age, experience, use? Is it that the cover no longer reveals what's inside? The title page says it's School Arithmetics: Book Two and is only about 90 years old, but living in a musty basement and surviving a doodler's childhood was almost more than it could take. Inside, besides writing her name in cursive over and over, Jonathan's grandmother copied the following verses and thoughts, which I'll let speak for themselves. 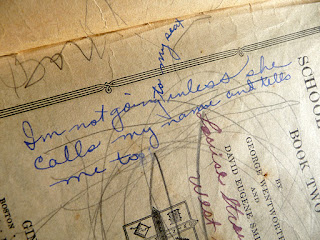 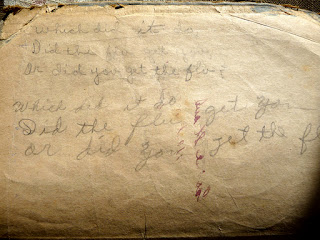 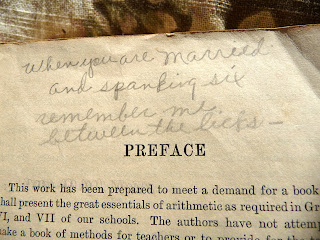 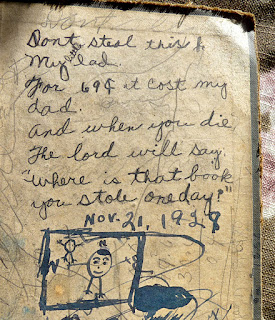 Don't steal this [book]
My little lad.
For 69¢ it cost my
dad.
And when you die
The Lord will say:
"Where is that book
you stole one day?" 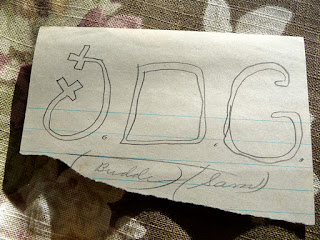 The above was tucked into the middle of the book. I can't quite work it out. Can you?

The next find was a facsimile letter from the author in a book club version of The First Overland Mail by Robert E. Pinkerton. (This book is recommended reading by the Smithsonian National Postal Museum. Their site is really well done and fun.) How appropriate to find a letter in a book about mail. 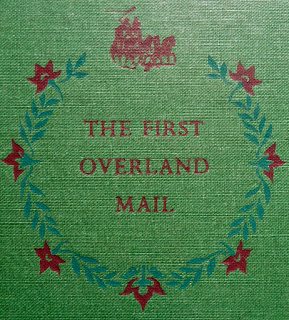 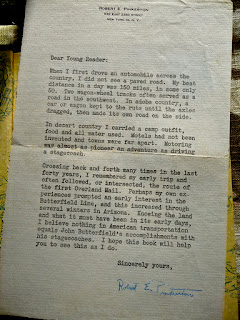 The last and best find was a sixth year study reader from 1925. Not only is there A Map of Bookland inside (along with tips for travelers) . . . 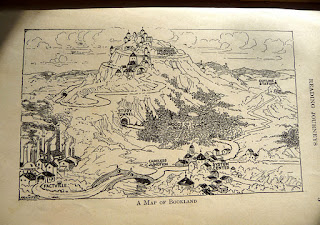 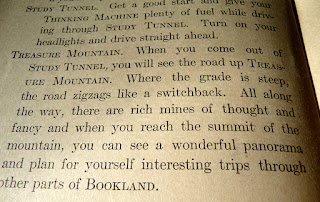 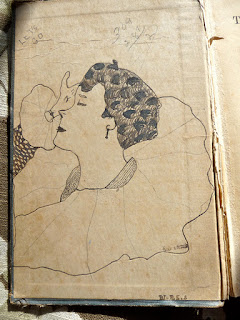 ~*~
"For who can wonder that man should feel a vague belief in tales of disembodied spirits wandering through those places which they once dearly affected, when he himself, scarcely less separated from his old world than they, is for ever lingering upon past emotions and bygone times, and hovering, the ghost of his former self, about the places and people that warmed his heart of old?" Charles Dickens in Master Humphrey's Clock
Posted by Robin at 1:13 PM