Diary of a middle school psycho

If one of your offspring is in middle school and you're worried s/he will never, at this rate, turn out to be a normal human: take heart! I've just been going through my middle school diary and will now prove to you, with just a few excerpts, that a shallow, boy-crazy, ridiculous, if quite spiritual and thoughtful on occasion, spaz can turn into a pretty reasonable person (if I do say so myself), which is, as you'll realize after reading the entries below, a small miracle. In honor of crappy literature and unbridled self-expression and the art of writing for preteens, please, step into my 12-14 year old psyche... 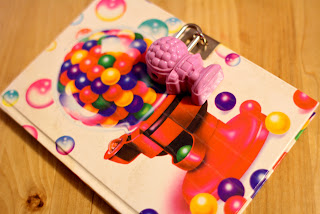 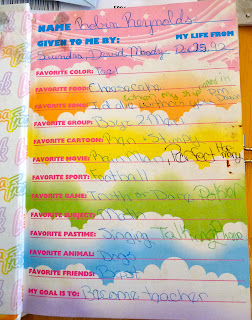 "Today is Christmas day, and I got this [diary] for Christmas from my sister and brother-in-law. I love it." 12-25-92 11:00am
"Today's been a drag so far ... We rented (watched in order) Hook, Sister Act, and Child's Play 3, wich all of those are great."
"One night when I was about six, I had an expierience. I was layin' in bed and I looked out the window and a man appeared out of nowhere and checked our meter and smiled at me. It was like 9:30 at night. Then, he walked off and, like, disappeared. That wasn't a dream either. Wierd huh?"
"When I was a little girl about 3 and I would always talk to this little girl about my age now, (12), and I'd talk to her every night after praying."
"I had a dream that this big thing was killing everybody so me and two other girls went to the hospital with 3 guys we put the guys heads on a oporating table and the big thing came in and told us we had to repopulate the world and it would come back in about 100 years. Us girls ... pushed their heads off the opperating table on to a electric shocker thing, and walked out real prissy like en vogue and the other girls and I just got to live cause the big head thing liked our attitudes."
"I had a dream last night that I had to go to a low social studies class a 6th grade teacher taught and the reason being I made like an f or something."
"I got a D in social studies. Uggg."
"I haven't dreamed much lately. I'm grounded from going or phone but I can on weekends. Yaa Woo. ... Oh, my ideas; velcro skin ... mirror skies ... fat sucker ... rotting eyelids. All for now."
"I'm sitting here thinking about my dreams. I had one about a cloud, big black swirly wind. It was wierd."
"OH, I AM NOW IN LOVE. GUESS WHO HE IS?"
"MTV is starting to bite ... I want a spider, dog, cat, monkey, any kind of pet, I wanna name it Red, Rambo, or Terminator! ... PSS ANYONE READING THIS WIthOUT PERMISSION, (If you can read it, that is), is DEAD MEAT!!"
"Mom's being a butt ... A's called 4 times and mom's made me get off all 4."
"I hid R's Bible with his phone # [in it] Sunday and called him to tell him he left it and I got it for him"
"M's boyfriend got, stabbed, oh, I mean, a knife injury, last night. I need to get something done with my hair, and I need to loose about 20 pounds. I wish my eyes were so blue they were almost white ... P.S. M's dog puked in the floor and we forgot to clean it up, and J layed in it, he doesn't know though."
"About R, he's going out with a sixth-grader, so, he's probably looking for someone so, I was gonna go up to him tonight at church and say, in mid conversation, 'Hey, can I call you sometime'"

"Well, my birthday's May 7, and I want a football, pocket book, camara, etc. etc. ... I just saw D at walmart. He normally doesn't pay attention to me but I had on my white, one-piece, shorts, blue polka-dot outfit on, and I have to say it was a good hair day, he looked at me like, whoa, is that you Robin?"

"I got a Hornets outfit, a football, and a camera for my birthday ... Now I kinda like A, but I really like C, and I REALLY, REALLY, like J. He's in 6th. He's really cute and nice. He asked me to go with him and I kinda said yes. Thought - I just thought to my self, I hope R doesn't tell [J] i'm stupid and ugly and stuff and persuades him not to like me; and I thought back to when he asked me and I thought 'wonder if people'ld make fun of me'? I feel bad now. That thought won't come to me anymore though. I love him, oh no, the 'L' word."

"Tomorrow's the last day of school. I got second in the 50 yd dash today."

"J had told me that C said he would rather go out with his dog than me even though his dog's a guy. So I glared at C all night."

"I wanna have a girl and a boy named Elijah and Alexa."


"Now I like M, D, J (A's ok). I got a CD player for Christmas. Shaquille O'neal and Charles Barkley are my fav. basketball players. I made an F in science."

"Well, my life's not going to great. I've been going with J for about 2 months now. T, his cousin, asked me out about a week ago. I didn't answer and L, his [ex], was after me, but they got back together at the dance. A, M's [ex], D's best friend, asked me out. I would not answer so him and M and the rest of the people at the dance got into it. They (M + A) almost got back together, but A asked me out again and D told me about an hour ago that he wanted me and him to break up and A and me to go out. I talked to P tonight him and R broke up at the dance, me and him are accually getting along again. B likes S now ... I went to church tonight and talked to B he's accually being nice to me he's been kinda stuck up since he moved back, but, I think he's changed since last time we talked. I called a few times and he was pretty nice then too ... Oh yeah, I told A I'd probably go with him if we didn't get too serious and he said ok, but then he asked me to come over and watch movies on Friday, which I doubt mom will let me, but that's ok! That's ok is my saying. But anyway, I think M is gonna go out with C which figures ... We have a game tomorrow during school and if we win we will be number 1. Then we go to tournament, then to Final Four, which would be pretty cool ... It's boring at this house cause we don't have cable hook up until the 14 when I go back to the dentist. We got a cool cordless phone today, it's in Bob's room. Mom made my room look country it's pretty though. I'm getting sleepy, which was my original plan, but I've already written 6 pages ... A bought me a carnation at school. They give them out for valentines day. I don't know I want to go with him or not. I mean I do, but I don't ... I had a dream last night that I was gonna die and was about to and I woke up. Well, later. Robin"

"I'm talking to J he's good looking. I think I kind of like him again but maybe not. I'm going with A since last night."

"Well I'm having problems. Me and T broke up, D asked me out, and I like J more than ever."

"Friday will be D and my 3 month anniversary. beginning to loose interest. I passed 8th grade but didn't make cheerleading at CHS. Well more later!"


~*~
Poor D got dumped soon after, and so began the summer before high school, when most everything would change into something new. There are lots more entries in this diary, mostly about which of my friends I loved and which I hated, about boys and social dramas. I was forever falling in and out of love. Why, I wonder, are we given childhood as our first experience of the world? It's a bizarre land closed to adults and run by tiny people who see things that aren't there and express their feelings without holding back and form little governments and communities around themselves, whether they be peopled by family members or friends or teachers or ghosts or shrubs. Then without knowing it, they slide into the preteens, that period of still being little but wanting to be big, of being concerned with the smallest things and being harmed by even smaller ones. Everything is terribly important. But things are also fun and exciting, and so many things are new and hoped for. Bless those days for not being about bills and jobs and finding ourselves! Bless them for being about the now, as the now somehow loses out to the then and the when as our hair turns gray and the creases at our eyes don't disappear with our smiles. Don't get me wrong though--I wouldn't go back for the world.


~*~
"Just at the age 'twixt boy and youth,
When thought is speech, and speech is truth."
Sir Walter Scott
Posted by Robin at 12:51 PM