This week in class, I assigned definition essays. My students were given lots of options, including the option to define an abstract concept through a personal narrative. The only rules beyond good grammar and MLA formatting: focus on one concept, don't do any research, and do it all in 500-750 words. The best example I found for them was 'Happiness' from Nikos Kazantzakis' Report to Greco.

I've been teaching since August and have assigned lots of papers since then, but I've yet to try any of them out for myself. In fact, I can't remember the last time I attempted an essay like the ones I've been assigning, but it was probably sometime in undergrad. So, in honor of Valentine's Day, I've decided to write a definition essay as my dear students attempt the same in their homes or at their workplaces or quite possibly at the last minute on their phones on the way to class.

"Yeah, babe?"
"I wanna marry you when I grow up."
A knowing laugh.
"Nope," he said. "You just wait. You'll meet some snot-nosed boy and..."
I must have refused to listen from there since I can't remember exactly what he said next. I do remember thinking he didn't know everything I thought he knew. But it turns out he did.
Kindergarten wasn't far ahead, and that's where I'd meet Logan. Curly-haired. Cute-faced. Love of my life. But Summer liked him too. And she had the guts to let him know.
"I kissed Logan today," she said.
I didn't respond. Logan didn't deny it.
"Right on the cheek."
So that was how it was going to be, I thought. Logan, the weakling, letting some other girl kiss him. Fine. That must be the kind of girl he liked, and if that was the case, they could have each other. (I'd keep that mentality for a long...actually, I still have that mentality.)
It took me a year to get over it, but I did manage. His name was Jason. He had a funny deep voice and tanned skin. And he was rich, in my estimation. But best of all, Jason was funny. Jason and I had good times playing hide-and-seek and making sure never to hold hands. But those times eventually faded, and if there was a void, I filled it with my first longing love. He was Jeremy. I was in fifth grade and he was in fourth. He was easily the cutest guy in school. And quiet too. Not brooding. Sweet quiet. Romantic quiet, surely. (I never considered bad-conversationalist-quiet.) He was the first guy who wouldn't notice me, an act that sets love in stone.
After that came middle school: the gateway to the hell of relationships. It's the place where someone liked becomes someone to win, and someone won becomes a status symbol. It's the start of the game. By high school, you're in the ninth circle of hell, having skipped through several circles in-between because you're young, dammit, and don't have time for getting to know each other. Just get to the kissing! The idea of kissing was a terrifying prospect. How did one do it? But more importantly, why? And even more importantly, eww gross, please don't touch me with your tongue.
My first kiss was given to a sleeping boy at a church lock-in when I was in seventh grade. I figured I'd practice without embarrassment. He didn't wake up, so it must not have been life-changing for him. It wasn't for me either, so the next time was quite a while after, and though I won't give any names here, I can tell you he didn't deserve it. Do you know he came to my house just for that purpose? That idiot knocked on the front door, said something stupid, and kissed me goodbye without even asking. He was much too old for me, left with a smug look, having won what he came for, and never came back. Ass.
In the midst of the hell of adolescent love, there was one person. Isn't there always one? This one was my best friend. Through all the stupidness and ridiculousness of middle and most of high school, he floated in and out of my experience but stands out now as the clearest figure in my memory. He was the funniest of everyone I knew--one of those effortlessly clever people, quickest to the draw. I tried, in my idiocy, to convert him, to change him into the person I thought he should be. I suppose humor helped him put up with me. Sometime toward the end of high school on a day after that fateful but unnoticed day when I, like all of my friends, slipped into the very early stages of serious adulthood without realizing, my friend quietly acted on what we'd both suspected and had long felt but not known what to do with--and of course that's the day everything changed. Things didn't go the way they should have in a decent love story. I don't mean things should be different now. I just mean I didn't handle it well, and I suppose that's why I still dream about it. My conscience still tries to work out the scenario in a positive way, but when I wake up, the friendship is still lost, and I'm left with that unfeeling stare at graduation.
There were lots more stupid decisions after high school, and by then, I really couldn't be said to be making childish mistakes anymore. Mostly they were innocently lusty (I think that's possible, maybe even healthy) and never involved the selflessness that commitment requires. Most of them didn't involve love at all. They involved people still playing at being grown up, not realizing they actually were grown. And that's okay, in my opinion. They were part of the transition; they were preparation for the future; they were lessons in what love is not, which helped me recognize real love when I found it.
I remember a day in my teens when that old conversation about marrying Dad came back to me, and I started to cry uncontrollably. Dad asked what was wrong, naturally, and I don't know how he kept it together when I mentioned the memory and told him, in my dramatic way, that I still loved him dearly, though I no longer wanted to marry him. We had a good laugh then, and I wonder if, when dear Jonathan asked Dad for my hand in marriage, the memory came back to Dad. His response: "Don't ask me. Ask her. I've raised my girls to think for themselves."

It seems odd to talk about serious committed love in this essay because, in my experience, the marriage of minds and bodies becomes such an advanced form of love that it doesn't fit in with all the others. It's not a funny feeling in the stomach or thinking someone is cute and funny or hoping someone likes you back or even that dangerous stage (please do let it only be a stage with you, if you take nothing else from this meandering tale) when we think love is about control instead of freedom--no, married love is none of those. Married love--and this is a warning for the squeamish, a blessing for the adventurous--married love is a molting. It's an agreement to become one without knowing what one will look like, and it's a commitment to somehow remain free to be yourself within the unit. Married love has been both a glorious completion and a process of sometimes painful growth. It has been a blessing and trial, often in the same moment. It has been a tearing apart and a sewing back together. Is there anything else like it? 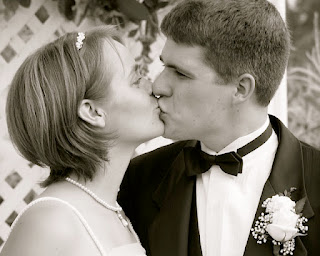 Since I've only got my experiences, and since there've been bazillions of people who've experienced love in its endless forms, I suppose I fail at this assignment. Because I can't actually define love. Love is yours to define. Plus I've gone over the word count, and that makes teacher especially irritated. Even more so than this fragment. Even more, than these, excessive commas. Because creative errors are expected, and awkward wording tolerated, but to neglect discipline, to ignore sacrifice, to refuse revision...those are probably the least forgivable of all.
Posted by Robin at 10:53 AM