My friend in Italy

Though I didn't get to see much more than the inside of hotel rooms in Italy, my friend and mentor Peter did. He's kindly agreed to describe his experience here, and has done it in his characteristic way. His style, I think, is one that, though it's entertaining in voice and form, forces you to pay attention, which I appreciate as the reader, because in speaking to his audience intelligently, he seems to assume we've got the intelligence to follow. You know those people who use normal adult voices to talk to babies and animals rather than doing that squeaky baby/puppy talk? He's one of those.

What he's left out of his account below is how much time he spent dealing with me, the poorly American. He hasn't mentioned how helpful he was in bringing me medicines from the pharmacy and crusty bread from one of the countless crusty bread shops he must have seen and bottles of water from I don't know where and still more medicines (from his own stores!) and colorful reports on how things were going outside my four walls. I don't know what I would have done without him there. I was grumpy and whiny and hard to deal with and slightly panicky, but he remained cheerful and helpful and kind and calm. Thanks for the blog post, Peter. But thank you more for being my friend and helping me get well and putting up with my grumpy face(s).

(For more from Peter on children's literature, see this video and the others in the series from Oxford University Press.)

~*~
Meanwhile, outside, Peter is wondering what to do with Italy.
But places are all in the mind, even places as emphatically placey as Venice, which is all detail as if a thousand happy designers, without straight edges, had been employed to do whatever they liked for a thousand years.  With a lot of ochre.  But everyone knows that, and I’m a useless tourist on my own - not sure quite what to do with a place. Even sitting almost on the bows of the waterbus, next to two happy French tourists, on a warm March evening, chugging up the Grand Canal and bumping into the pontoons of the waterbus-stops every three minutes, palaces stacked up along the canalside, terraces and tall windows – through some of which I can see chandeliers and wondering what sort of people can be sitting under them; and doors of the solid sagging houses opening onto water-steps; gondolas disappearing into dark alleyways of water. 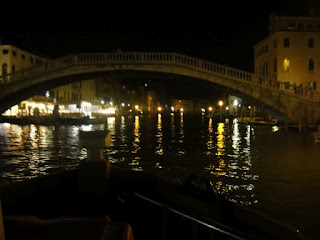 Sorry, Venice; I can’t get my head around it. Don’t get much further than thinking – would I prefer to be sitting in my study? Well, obviously not. But with no-one to say, ‘oh look’ to, then, why? Venice doesn’t notice.
And then I get lost, late night, between the waterbus-stop and the hotel. This is not surprising, given that there are ten alleys leading off every square - but it is strange. The moment I think, the hotel should be there – but it isn’t – is the moment I notice that every alleyway is empty and absolutely quiet. It’s not quite frightening or threatening, but ethereal. Walls and houses and leaning walls; alleyways that become ledges and then steps and then bridges. 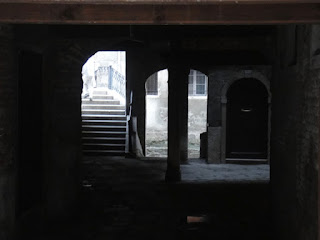 The dark, narrow, inscrutable canals. Small streetlights, black water; studded doors and doorways with low stone lintels. All slightly panic-inducing, especially when you walk down a long alley that ends at a canal. But nobody jumps out or mugs you (which is astonishing). Calm; don’t walk too fast. This would have been fun with somebody.
So it’s undoubtedly unfair to remember Venice by the number of dogs – what a place not to have a dog (do the owners think that what their dogs are doing (most of the time, it seems) is invisible, or elegant?). And then, of course there’s the other people:; coming across St Mark’s square by accident (someone seems to have tossed Venice up in the air since I was last here, and it's come down in a different pattern) - I’ve been to the Cathedral before, and inside it’s like the Mines of Moria – but this time the place seems up to its knees in tourists, so I don’t even venture into the square, in case I get sucked in. And become one.
But there are diverting images. Outside the hotel there is a man who spends half an hour photographing a doorway (I promise that’s what he’s doing). 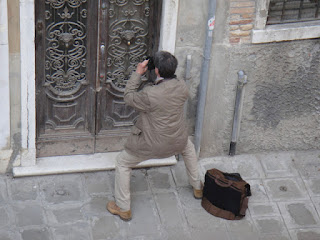 Venice is detail. Or there’s the gondola-ferry that takes you across the Grand Canal, dodging between launches and ordinary gondolas, waterbuses and boats delivering vegetables, and water-trucks with stacks of boxes that probably contain TVs… and you have to Stand Up on this gondola across the choppy water. Astonishing that nobody seems to fall in. 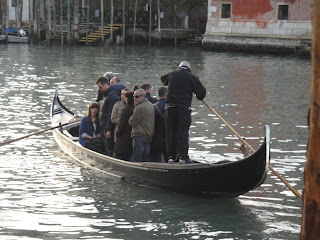 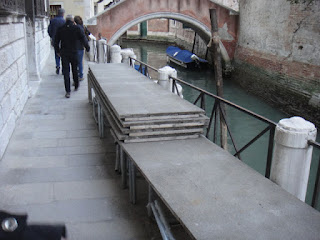 Then, a couple of hours down the railway line, across a plain with straight lines of farms, is Bologna, which looks a good deal like Venice without the canals (which probably speaks only to my architectural tone-deafness)... 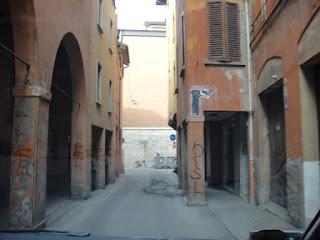 ...and the station forecourt is packed with people going to the Bologna Children’s Book fair... 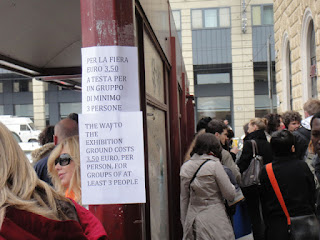 ...whence taxis depart for a vast complex of exhibition halls. 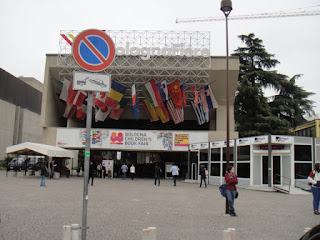 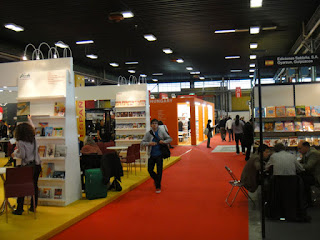 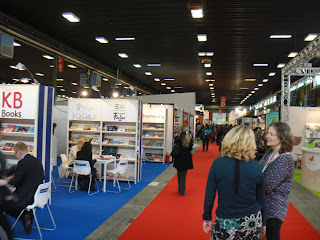 ...of stands - hundreds of thousands of books. And thousands of professionals, signing deals, buying rights. Astonishing (‘Surely,’ I said to my guide, ‘these can’tall be professional book-publishing-type people.’ ‘Why not?' he said. 'Because there can't be that many people in the world with that slightly superior self-confident look' did not seem to be the right answer). But also, to an outsider like myself – I was there to launch a book and talk to a publisher - it’s more mind-boggling than engaging.  After a while it seems that the big publishers, whose vast stands resemble the foyers of banks or airport executive club lounges, are all clones, selling cloned products – and the tiddlers are either book-packagers selling series that merge into each other, or specialists selling beautiful, original stuff – if you have time to discover them,
Back in Venice, however, whiling away a day. Far better to remember sitting in the square in the unexpected sunshine, having a beer and eating gnocchi... 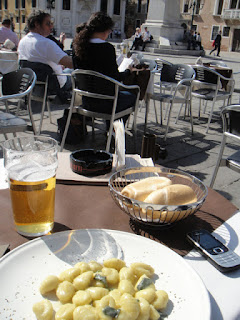 ...and pretending to be Venetian; watching the hoards and squads of tourists - and admiring (or being astonished at) teachers herding the classes of school children – what a place to mislay a child or two. 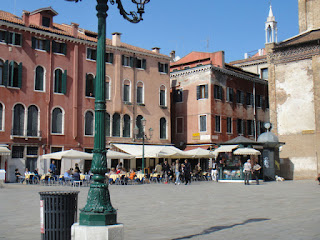 What a place: is it still there, I wonder? Was it ever?