We're nearly halfway through November now, and I've broken the 20,000 word mark, an accomplishment that suggests I could win this year. Though maybe I shouldn't speak so soon. Thanksgiving, travels, guitar lessons, teaching, tutoring, work training, procrastination, and frequent naps and chocolate breaks will seriously threaten my word count goals in the coming two weeks. That said, I could stop now and be proud of what I've accomplished. Coming into the challenge, I had a decent start on the story. Now I'm a solid 20 chapters in. By the end of NaNo, if I succeed, I'll have at least a 60,000 word novel completed (and what's looking like the start of a series). 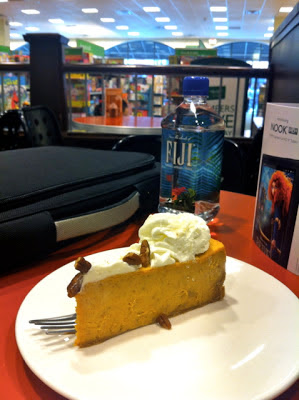 Writing away from home at Barnes & Noble with my favorite autumn
treat. More eating than writing done, but with pumpkin
cheesecake, the trip is never a complete loss.


As far as the writing community goes, most of my involvement has been in the chatrooms doing word wars to get my word count up quickly. When motivated, I can get a solid 750 words in twenty minutes without trying. I'm nearly done for the day after a couple wars. The problem, as always, is focus. Even though I'm taking my vitamins like a good girl now, I still get distracted easily and sometimes take all day to get the 1,667 words I need in order to stay on target. I even got distracted at my first Atlanta-area write-in, though to be fair, it was mostly by my yummy potatoes and eggs breakfast. I met a nice group of people, one of the NaNoLanta (as the Atlanta chapter is known) mascots (see pic below), and had a good time, which is what matters most (aside from the words--come on people, we can be friends later, this is serious). Okay, fine. Friendship is better than racking up words. A few of the friends I've made through NaNo over the past few years have even become friends in real life, and that's probably the reason I keep coming back. 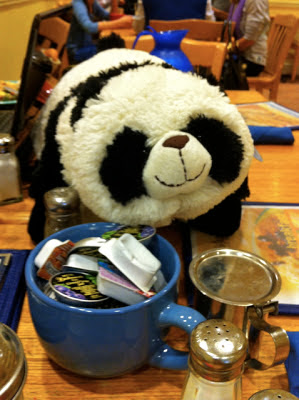 The NaNoLanta Panda who greeted me at my first Georgia write-in.
He (she?) is fed and nurtured the other eleven months of the
year by write-in host and new NaNo pal Naty.

As for the story, it's still keeping me interested, surprising me at least once a chapter, and progressing terrifyingly smoothly. This never happens when I write. Something must be wrong. Cool moments keep plopping into each scene as if they were always meant to be there and have simply been waiting for me to put them into words, and when my characters don't like something that's happening, I can feel them getting frustrated with me. I've had to force very little (there's always gonna be a bit of forcing with the time crunch), and because of that, this has probably been the most enjoyable fiction writing experience I've ever had. So, yay for NaNo. More once I've hit another milestone. 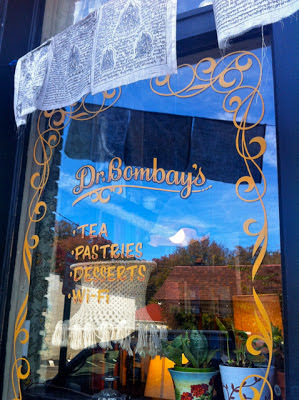 Lunch at Dr. Bombay's Underwater Tea Party for a writing date with a writerly friend.
Didn't get any writing done, but had great conversation and a big fat pimento
cheese sandwich. Hmm...my writing life seems to revolve around food...

"Your job isn't to find these ideas but to recognize them when they show up."
~ Stephen King, On Writing
Posted by Robin at 1:10 AM