Christmas: A Series of Short Stories

It was Christmas Eve, as I recall Dad saying. His family were the remnants of mountain folk; they knew how to get by on a little. Granny and Papaw insisted they'd never seen the man before. Never knew where he came from. He knocked that evening, which may sound unlike him, since he's supposed to come down chimneys, but he knocked because these were a people who liked to be met face to face or not at all. I can see them sitting around the room, stoic, no one saying a word. A nod from the men and boys, the hint of a smile from the girls--all bathed in a silent moment of wonder and wild guesswork and chance and magic and doubt as he gave them presents: apples and oranges. I wasn't there, but it's like I was. The reddest apples, the most orange oranges, the nicest, juiciest fruit you've ever seen.

When you're a kid, and you see a ghost or an angel or a monster or any magical wisp of anything in the air, the adults tell you you're mistaken. Just goes to show how stupid adults can be. Christmas Eve night, I slept with my parents. Their bedroom door opened to the living room, so I fell asleep squinting my eyes at the tree like Dad had taught me so each individual light would spread into a star. Next thing I knew, my eyes were open again. The room was dark, so I couldn't make out the red suit as he moved here and there amongst the presents. I stayed absolutely still and silent, knowing who he was. But I must have blinked. Why would I, in such a moment? But I must have. He was gone. The adults probably told me I'd dreamt him, but I believe in him still. It's the least I can do for a girl who saw a grand picnic where only a blank piece of cardboard lay months later in the springtime sun, its brown edges curling in the dewy morning grass.

Resurrection, or Growing Up

There were no teachers to decorate bulletin boards in the hall or put on holiday parties. The parents weren't around to buy a tree and spray it with fake snow. No longer would someone put a pretty dress on me and take me to church and give me a candle and a hymnal full of carols about Jesus. I didn't even have to go to Granny's on Christmas Eve if I didn't want to. We were married and all grown up, and Christmas was up to us now.

And so, we evaluated the old traditions. We questioned consumerism. We tried to determine value versus cost. We asked what mattered and what didn't, how to be conscientious, whether or not to decorate the front door, whether a real tree or a fake one would be better, whether or not we should do anything for Christmas at all, till we'd boiled the holiday in a can of processed pudding and buried Santa with a sprig of plastic holly through his heart.

But after a few longing, nostalgic years, a magic has started to return. Personal traditions take the place of those gone--traditions that drive nails into life for me, that keep me steady when everything's spinning. They're markers. They remind me where life gets its meaning. I grab and hold on to things as we spin. Lights on the house. Catnip in the stockings. A squeaky toy for the dog. The nativity on the piano. Ornaments on the tree. Bing Crosby on the radio and Jimmy Stewart on the t.v.

Resurrection is a process. You get yourself upright, take off the wrappings of the dead, and fold them neatly on the bench before catching your breath, which all sounds like a miracle but isn't really anything compared to getting the big rock out of the way of the door, which is practically nothing at all compared to convincing everyone on the other side that you're still you. At least in spirit. 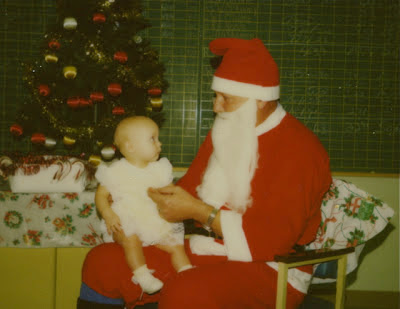