I met Britt Kauffman at the Carolina Mountains Literary Festival in Burnsville, North Carolina, September 2010. Aside from the festival being in a quaint town center surrounded by mountains and the author talks taking place in lovely quirky shops, what was really great about the event was the promotion of local writers with the kind of respect they were due. 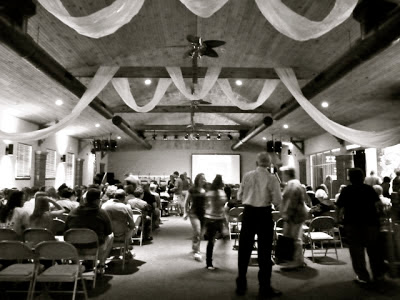 I haven't been able to go to the festival since, but Britt and I have kept in touch. I knew her originally as a poet, but have since learned to see her as a playwright, a mother, a wife, a strong mountain woman, and a deeply convicted artist. Thanks, Britt, for your willingness to be a One Question Interview interviewee.

My one question for Britt was this: How is the process of writing for the stage different from (and the same as) your other creative writing pursuits? Here's her answer.


~*~
When first posed with the question of how do I approach writing poetry differently than writing a play, I struggled not to elaborate on the obvious. Well, one is short and it takes less time and far less sustained thought. Honestly, though, that’s how it bore out in my life. (Pun intended. You’ll see.) I had three kids in two years (a singleton, then twins) and while they were young, I could only think as long as a poem. It was the year my twins started kindergarten that I finally had the gumption to tackle something as long as a play. But again--obvious, and I so desperately wanted to say something worthwhile in this blog post. After much mulling, I finally hit upon two major differences that might possibly be interesting to other writers: voice and research.
One of the elements of being a poet is finding “your voice.” As nebulous as that sounds, there is a constant probing to discover that subject matter or style, that perspective a poet brings to seeing and interpreting the life they experience. Maybe it’s a particular lexicon, a way of using words in unexpected ways, bizarre line breaks and indentations… whatever it is, a poet works and hones that essence of poetic voice. Just like a contestant on Project Runway, a poet strives for innovation, meeting the challenge, but still with an aesthetic that is distinctly their own. Each poem is a flash of insight, filtered through his lens on this world, transcribed through his voice for the rest of the world—that they might now understand the world in a new way, see a connection they might otherwise have missed. Compiling a chapbook then becomes the task not of expanding the voice, but focusing it by writing or assembling poems to intensify that personal voice.
Not so for playwriting.
One of the biggest signs of a new (or poor) playwright is that all the characters sound the same – have the same voice. Each character must have her own distinct voice, lexicon, way of expressing herself, verbal tics and they must be recognizably different. For example, Martha (in my first play) was a gossip, so every time she spoke, she went on and on. Louisa Mae only spoke in questions. Loretta spoke in one sentence dry declarations. My voice, as a writer, could really only be present in one character in order to make the play convincing. Further, have you ever sat and listened to a poetry reading? Listening to poetry is a taxing task—the language is loaded, dense, and there are so many potential meanings. Yes, poetry is meant to be heard aloud, but it resonates with us so much more if we can take the time to ponder it. If I wrote a 2 hour play like that, I would be asking a lot of my audience—and forget taking my kids. Also, people just don’t speak that way, and if I used my poetic voice in playwriting, the character interactions would hardly be believable.
Here, in your heads, you bring up Shakespeare as a counter argument… and well, good for him that he could write so well. I’m no Shakespeare.
The other major difference for me is research. When I write poems, they come from a moment of insight, or an indelible image. The books and articles I read influence my poetry yes, but rarely do I set out to do research to write a poem. (I know several poets who have done this – Pat Riviere Seel for her chapbook The Serial Killer’s Daughter and Holly Iglesias for her chapbook Souvenirs of a Shrunken World.) Obviously it can be done, but it’s not a part of my process. For my plays, however, I do research. For the first, I dug into history books to learn more about the Battle of Burnsville and the women’s raid on the Confederate storehouse during the Civil War. For the second, I spent a lot of time scribbling down on a legal pad the inane things my husband (and other men) yelled at the TV during NFL games. And now, for the play I should be plotting currently, I realize I need to study neurology, singularity and how self-perception is formed. Ooof. Clearly my playwright voice is not one that favors a particular subject matter.
In writing this blog post, I have come to ponder where my “voice” is in my plays (especially because they’ve been comedies and I’m not a particularly funny person). Does one character in each play embody my voice? or Do I dismiss my voice entirely? If anything, I suppose I’ve put my voice in the subtext of the plays and that, somehow, seems fitting for a poet. 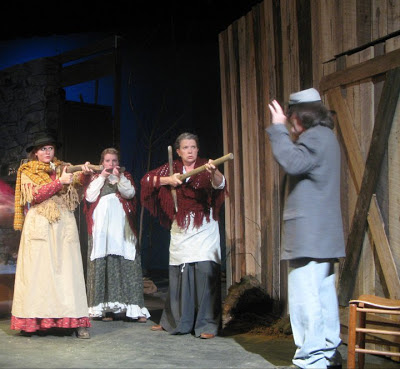 from An Uncivil Union:  The Battle of Burnsville 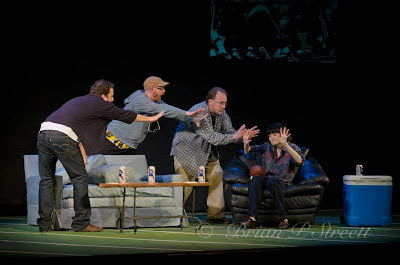 from Between the Tackles