The earliest solid memory I have of my brother is him throwing me into the waves of the Atlantic off the coast of St. Simons Island, Georgia. That was probably around the time below--the 80s, as you can tell by the keen fashion sense of my siblings and me as we pose somewhere in Appalachia: 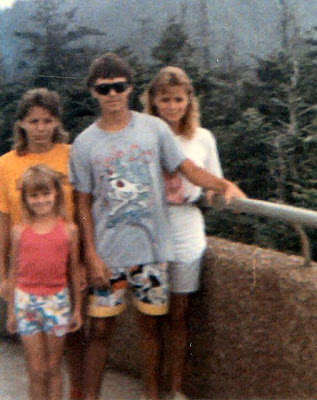 My second memory is of him getting into trouble during high school for doing any one of the many mischievous things he did in those years. Mom and Dad were letting him have it, as any caring parents would, and in my childlike wisdom (in one of the few brave moments of my early years), I spoke up (i.e. screamed) and demanded he be left alone. That . . . did not work. But it goes to show, I loved my big brother.

The thing about Bob in those days, and in these, was his confidence and determination, his intelligence and humor. But what I didn't know back then, what took adult eyes to see, was that Bob is also good.

I could tell you about how I've learned he's good. Oh, trust me, it's a television worthy tale. There's the corruption of the healthcare system, the loss of home and assets, lives and loves and liberties, the eventual gain of wisdom about how easily and quickly everything can change when a powerful and wicked person or body decides to make sweeping judgments. I could tell you about redemption and grace and help being available when most needed. And about all the voices who spoke out for him and all the people who rushed to help. About the fact that, however much support a person has, he still most often carries the load alone. And about sorrow: deep sorrow and regret and anger over grave lies and injustices. And about people being revealed for who they are when times get tough. And I could tell you the most private moments and the most powerful--the ones of wanting to give up but instead standing up straighter than before. I could tell you every little detail. And it would be a great story. But the details aren't mine to tell. And it's not a story. It's someone's life.

What is mine to tell is that through the fire, my brother has been good. He's been properly dragged through the mud and abandoned and abused and downright shit upon, yet stood with a dignity I don't understand. He's fought for his right to say that he is a free man and will remain in control of his life. And when control has been taken in spite of that strength, he's stopped, taken a breath, and said, Fine: I'll work this out somehow too. And by God, he has.

This Friday, Bob, my dear brother Bob, who just minutes ago, seconds maybe, was waiting for the next wave to throw me into that murky island water, is tying up the last loose ends of one of the hardest trials I'll ever watch anyone go through. I have no doubt anywhere in my mind that, as hard as Friday will be, Bob will keep walking. That's just the kind of guy he is.

So let's take a moment. Let's stop and look at the Bobs of the world. Let's look at those men and women who walk through storms, push through the blasting wind and the flash of lighting and the roar of the sky and the sting of the rain--those who make us think, my god, what's keeping them from falling? And then down the road, when things get hard for us, let's think of Bob and say to ourselves: Whatever happens tomorrow, I can handle it. I'll be okay.


Love and respect and admiration for you, brother.
We're all right here beside you. 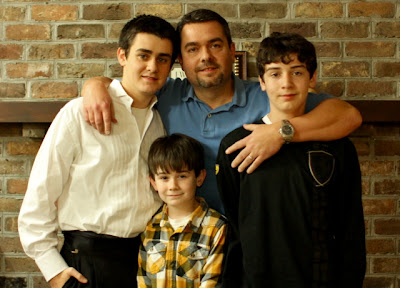