"'… from here that looks like a bucket of water,' he said, pointing to a bucket of water; 'but from an ant's point of view it's a vast ocean, from an elephant's just a cool drink, and to a fish, of course, it's home. So, you see, the way you see things depends a great deal on where you look at them from...'" ~ Norton Juster, The Phantom Tollbooth


~*~
Last night, thanks to the World Book Night USA folks, I was proud to once again give away a box of books at the university where I teach. Most WBN Book Givers go into the wide world to distribute books to people they've never met. I'm lucky enough to personally know most of the people I give free books (and chocolate!) to. 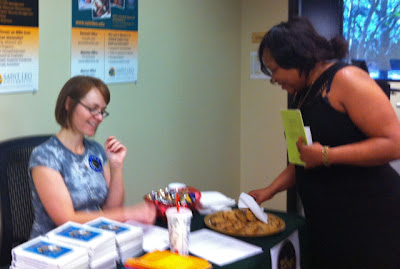 The only stipulation for my being a Book Giver on campus is that I have enough books to give at least one to every student (don't worry--it's a small campus), so both years, along with the twenty books from the WBN people, I've given away children's books as well. This year, my WBN giveaway was Norton Juster's The Phantom Tollbooth, and my children's book giveaway was a pile of Scholastic's Bob Books for beginning readers, which went even faster than Tollbooth due to the students having lots of beginning readers in their lives. 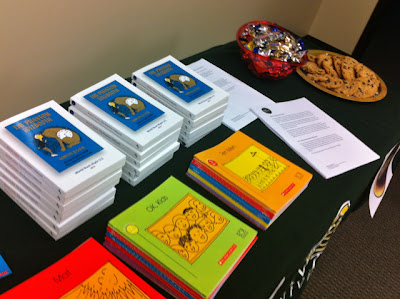 By the end of the night, much chocolate had been devoured, and words and stories had been sent out into the world to do what they do best. A huge success. Many thanks to World Book Night USA and all the sponsors who make the event possible, and especially for my chance to share the love again this year with a bunch of people I care about. 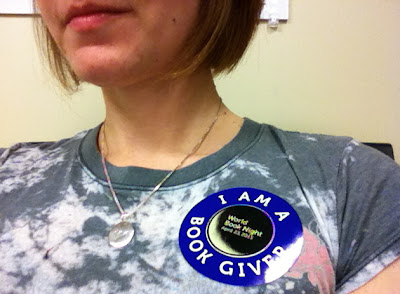 ~*~
(More quotes from The Phantom Tollbooth to convince you it's awesome)
"Expectations is the place you must always go to before you get to where you're going. Of course, some people never go beyond Expectations."

"'I never knew words could be so confusing,' Milo said to Tock as he bent down to scratch the dog's ear. 'Only when you use a lot to say a little,' answered Tock."

"'My goodness,' thought Milo, 'everybody is so terribly sensitive about the things they know best.'"

"What you can do is often simply a matter of what you will do."

"'You must never feel badly about making mistakes,' explained Reason quietly, 'as long as you take the trouble to learn from them. For you often learn more by being wrong for the right reasons than you do by being right for the wrong reasons.'"
Posted by Robin at 9:07 AM