On stories that write themselves

It's a comeback tale! In spite of teaching classes, taking classes, Thanksgiving travel, sickness, and many days when no writing was done at all (see plateaus in the graph below), my little novel got to just over 50,000 words in the 30 day time limit! 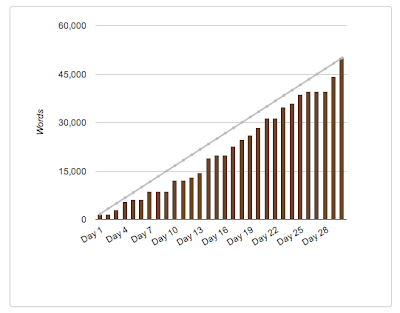 But finishing isn't what was great about this year's NaNo. You know how writers sometimes say, "The story just wrote itself," and you want to punch them in the face? Well punch me in the face because I've figured it out. As a result, it's the best NaNo novel I've ever written. Wanna know the secret?

I knew my characters.

What do I mean by that?

1. I did not write extensive character sketches about what color shoelaces each character prefers. I did not know all of their likes, dislikes, physical features, or personality quirks. I didn't know their entire histories or what their futures would hold. For a couple, I didn't even bother giving them a decent name. It's a draft. That stuff can come later.

2. What I did know was every single character's motivation (what he or she wanted) and conflicts (what was going to get in the way). Every major player was on a journey, not just the protagonist. Every. One.

So here's the big secret: Stories don't write themselves. Characters write them.

If you take, say, five characters, give each of them universal goals, and throw them all on a farm or a spaceship or a medieval estate, they will behave and progress naturally and create many of their own conflicts. Whether the combination is interesting enough to read is another issue. That's why you follow the main character's storyline, the one that came to you as the seed of the story that got you excited about putting it on the page. Build in realistic obstacles for your protagonist, given the situation and setting, but get them to their goal in the end, and let the other characters have lives too. The main story will follow the ups and downs of your protagonist's journey, but just like in real life, everyone isn't riding your train.

The stronger the characters, the more meaningful the goals, the more tangible the settings, the more believable the relationships: the better the story. Focus on those. Pull from people and places you've known, struggles you've gone through, scenarios you've imagined. These are what make a story unique. But don't waste your time trying to invent brand new goals no one's ever thought of. That's impossible. The goal is always to overcome, whether the protagonist is successful or not, whether the goal honorable or not. It's the circumstances and the players and the style that are new, not the hopes and dreams of your characters. Those are what make a story relatable. You didn't think Harry was the first outcast to become savior of a world, who had to die and be raised from the dead and beat the ultimate bad guy and learn to accept his burden with grace, did you?

Think about every story you've loved. Whether it took place in a time machine or in the turn of the century slums of New York, whether the main character was a fallen hero or a young Jewish girl, the story was about love, life, loss, courage, friendship, change, etc. The universals. Your job as a writer isn't to come up with a new human condition, it's to build unique characters and places and circumstances around the human condition that already exists.

And when something isn't natural to the character or the world you've built, you'll know it. It won't have gone to plan, and that'll be frustrating. But it'll bug you every time you get to that part of the draft. You'll feel like you can't ever create a strong story, like you're a bad writer. Don't. Spend that self-loathing energy on starting again from the point where things went weird. Make what happens next realistic to the world and characters on the page instead of forcing it into the shape you thought it would take. It's less about killing your darlings and more about accepting the fact you can't always tell the future, even of your own creations.

I guess this is why stories sometimes go left when we meant for them to go right, because when that monster you created showed up as a conflict for your main character, you hadn't thought through the fact that one of your secondary characters would be in the perfect position to save the day, and logically would have to do so or else the story would seem contrived, at which point you have to say to yourself, "Did not expect that," and just like in life, realize you had an ally where you thought you'd just had an acquaintance, and move forward from there.

'Tis all the NaNo wisdom I have for one year, fellow writer, but it's served me well. Here's to another finished draft in need of a good polishing.