I can't count the times I've heard, "Write what you know." Harder than it sounds. Sometimes, it feels like I don't know much. Other times, what I do know gets buried under daily life. One trick to get out of that kind of rut is to drive down roads that I've never driven down before. Who lives there? What are the buildings like? Does one house stand out from the rest? What might happen behind its closed doors? Then write down everything.

Now go to the next town over. See the local tourist spots. Visit places you don't consider sacred but others do. Is there a museum? Go inside. Eat at a local diner. Talk to people. Write it all down. Now take a road trip across the country. Buy a mug from every state. Stay in b&bs instead of hotels. Stop at famous places and unfamous places. Watch the sunrise. Take notes as you go. Now save your money till you can fly across the sea. Land somewhere and eat the local food. Meet the local people. Find the hidden places. Take a cab somewhere and get the driver talking. Ride the train. Ride a boat. Ride a camel. Write everything.

Got kids and can hardly leave the house without all hell breaking loose? Order shovels from Amazon. Go into the backyard with the kids and dig a hole. Do it. Dig a huge freaking hole. Vote on officers for your digging club. Make the oldest child President of the Cavern and Keeper of Shovels. Make the middle child Treasurer and Keeper of Shiny Things Found in the Dirt. Make the youngest Protector and Keeper of Worms. You be Captain of the Yard and Maker of Rules. Then go inside and write that stuff down.

Taking care of someone who's old and ill? Research how to decorate a room to look like it would have when that person was young. Play the right music. Hang the right pictures. Talk. Is your patient too grumpy? Too ill? Has she given up already? Write everything down: How do the lines on her face show you she's ready to go? When's the last time she wore earrings or blush? When did she last laugh?

That's part of the reason Jonathan and I found ourselves on the east coast in a pirate hostel with pictures of buxom babes plastered to the bathroom wall, skeletons hanging above the doors, and a pirate chef serving us breakfast a couple weeks ago. 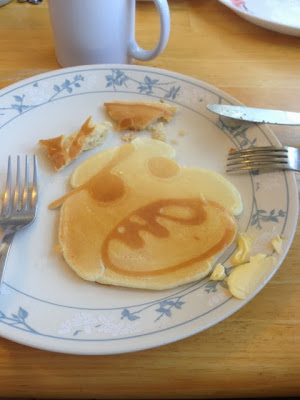 The plan was to spend a couple days in the sun before what was likely to be, and has been, rainy winter day after rainy winter day in Georgia. We packed our bags and headed to St Augustine, Florida, the country's oldest inhabited city (European-settled anyhow, since 1565), only to find the cold and rain had come with us. Fortunately, we adventured in spite of the weather!

As a result, I can now write about things I knew nothing about before. As excellent as the imagination is for creating stories and settings, and as indispensable as making-stuff-up has been for many a lovely literary classic, and as valuable as wikipedia can be for telling you about a place, writing what you know adds a reality that's hard to make up from scratch.

What do I know? First off, I know this little room at the Pirate Haus Inn. See the lazy pirate taking a nap? 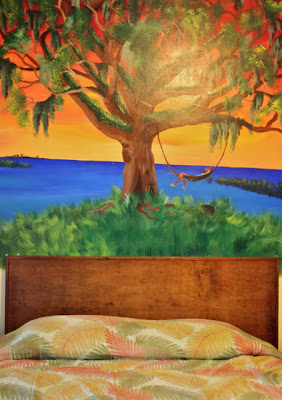 The Pirate Haus Inn is a bed & breakfast for budget-conscious travelers. The rooms are mostly dormatory style, and the entire place is piratey, from the decor to the staff. We even got a walking ghost tour by Gold Tooth Dave who doesn't bother much with Old Town like the other tours, instead taking you to the burbs where the real spooks live. The best part about the Pirate Haus is breakfast, where they make you personalized pancakes and you get a chance to talk with fellow travelers and pirates alike. 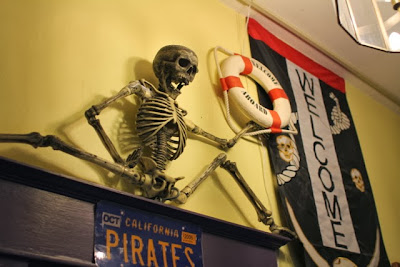 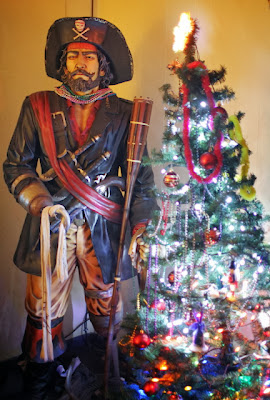 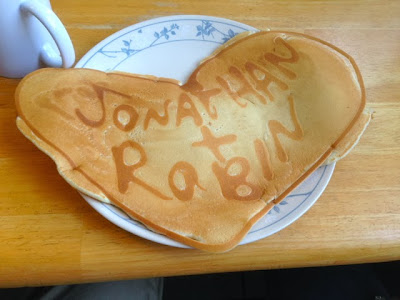 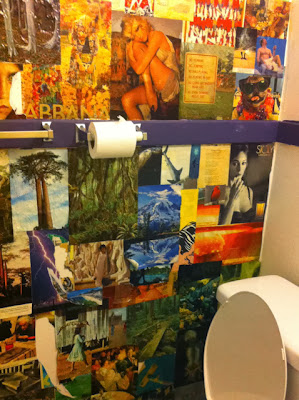 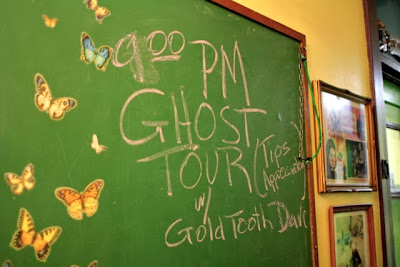 Besides the cool digs, there was Old Town right outside our door. Basically it's just several blocks of pedestrian streets full of restaurants and shops, with the old city gates at the end. 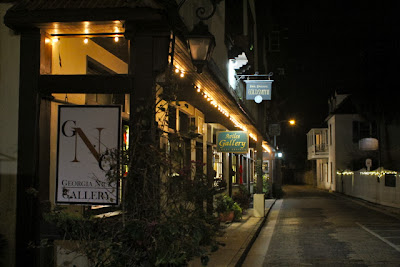 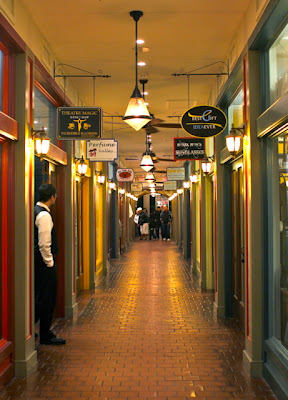 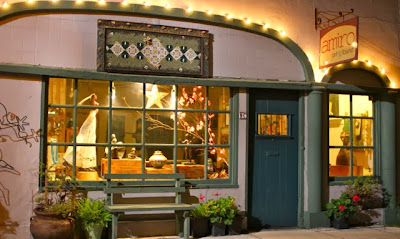 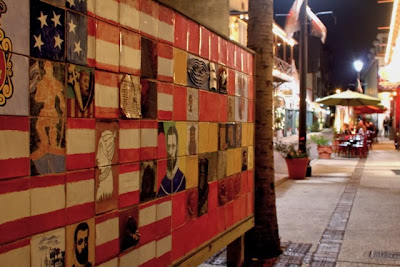 Very touristy, but with history mixed in here and there and lots of good food. If you plan ahead, you can get reservations at Columbia Restaurant and share the vegetarian paella and flan with your date, or my personal favorite, the black bean burger with goat cheese at The Floridian. 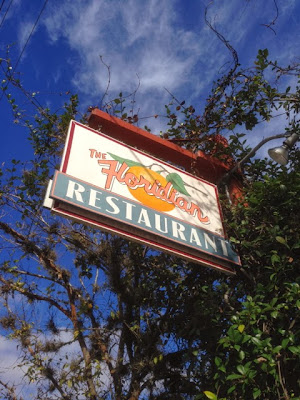 If you're more into museums, there's a mixed bag of old, new, and weird at the Lightner Museum just a few minutes away by foot. Like there's this stuffed lion that used to belong to Churchill: 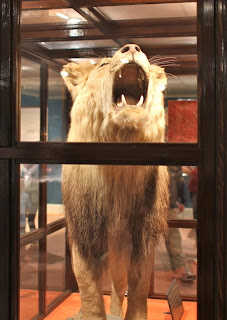 This blown and drawn glass machine: 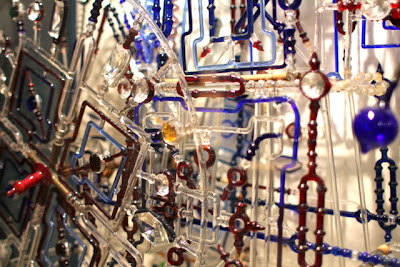 This cafe in the deep end of what used to be a swimming pool (what a setting, eh!): 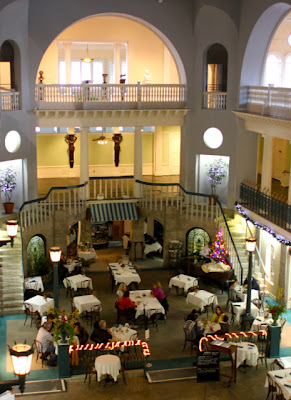 And weird folk art (for the record, I love my in-laws!): 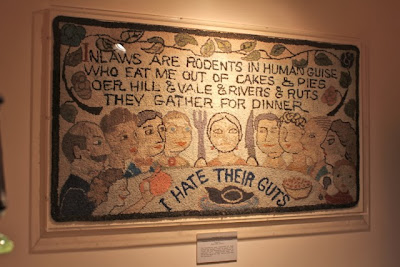 Between the museum and Old Town, we came across several small parks. One is on the waterfront, and the old slave market still stands there. 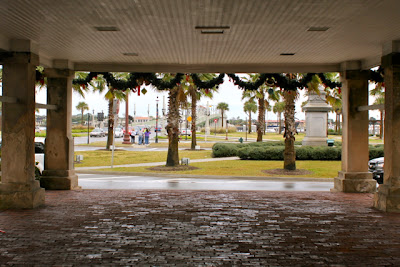 Though many a grim moment took place there, St Augustine later became known for its Civil Rights involvement (Martin Luther King, Jr. even held marches around the park). There are monuments to local heroes who stood up for the rights of minorities. When we were there, the whole park was cheerfully done up for Christmas, making such a history seem impossible. 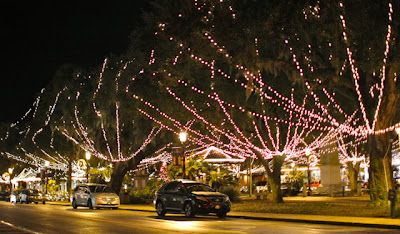 In fact, the whole place is packed with history. There are sign posts everywhere commemorating this guy or that guy, telling how old this church is and how much this or that place meant to the settlement of the eventual United States. Plus there's the fort, Castillo De San Marcos National Monument. There's tons of history behind it that I don't know. Hey you can only do so much in two days. What I do know is it sits right outside the city gates and has seen plenty of action. 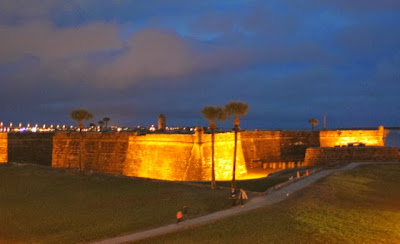 Over the bridge from the fort, on Anastasia Island (which blocks Old Town from seeing the ocean and gives it a bay instead), in 45 degree weather with 35 mph winds the day we were there, stood the lighthouse. After walking all the way to the top, I couldn't believe that before developing a pulley system the lighthouse keepers had to take the same walk every couple of hours with a ten pound steaming bucket of oil to keep the lantern going. Once was enough for me. 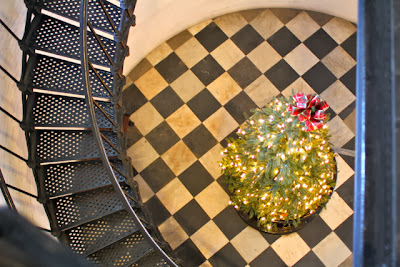 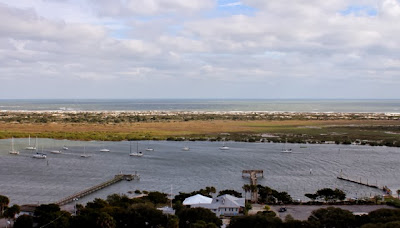 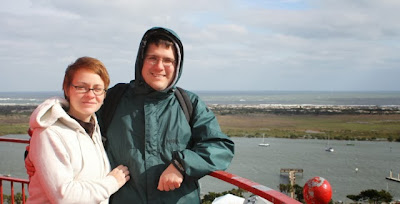 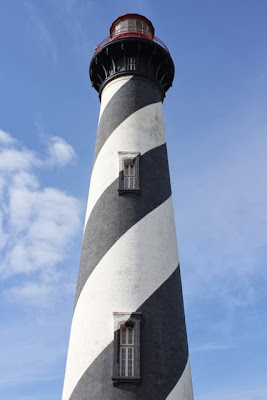 Because we were so close, we stepped onto the beach just long enough to take a few pictures and run away before our skin was sandblasted off by what was less sand and more bits of shell posing as tiny knives. 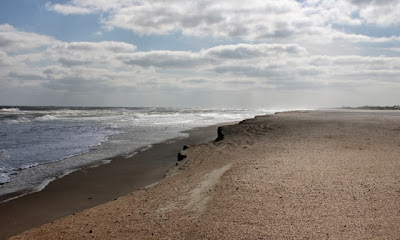 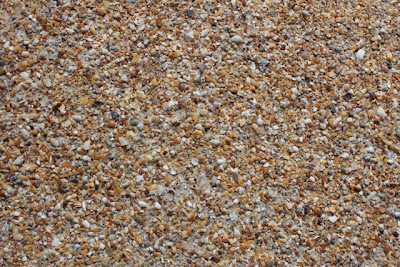 Little did I know that health would no longer be an issue in my life. Next stop: The Fountain of (stinking yucky sulfur water) Youth! Here's Jonathan with old Ponce: 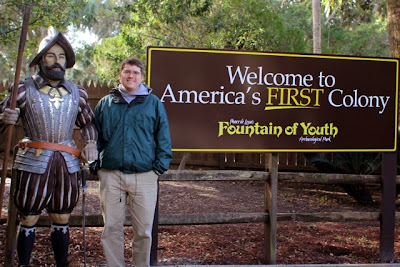 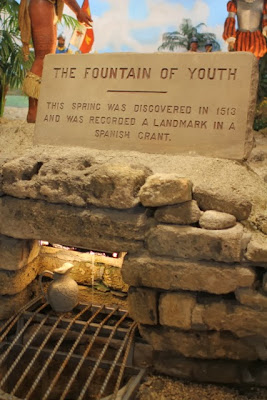 And the weapons demonstration, which looks bright and sunny but was so cold it hurt: 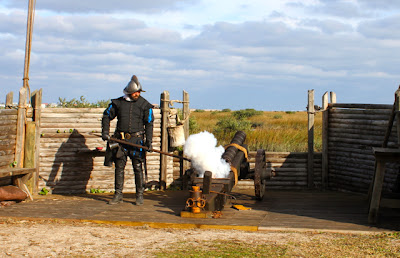 After which we went to dinner, walked the town taking pictures, and had an early night in before time to get up at 5:00 the next morning and drive the six hours back to get our happy hound.
Lots more happened, and there was lots we had no time for, but the point is: adventure. Just a couple days doing something we don't normally do, and now I've got all this information and more floating around my noggin, waiting to be pieced together across whatever stories I tell next. Fantastic. And a cheap weekend away.
So: Order that shovel. Drive down that back road. Cross the open sea.
And if you ever end up in St Augustine, say hello to Gold Tooth Dave for us (and watch out for the headless aristocracy wandering the back alleys…it's never the pirates you have to worry about). 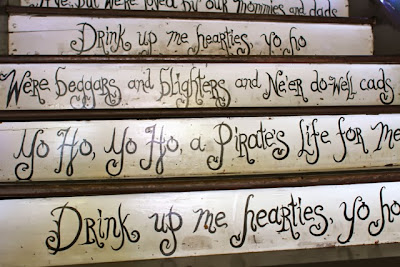