Recently, I posted a response to this silly question: Should adults read children's books? As promised, I shall now discuss one of the countless books that are irrefutable evidence that even a picture book (it's too easy to show how a young adult novel could be relevant) can take any person of any age to great depths of thought and feeling. The book is The Old African, with words by Julius Lester and art by Jerry Pinkney.


I could spend a long time telling you about how this book and the other works of these two artists have affected our culture, how they've both won multiple awards, how they're educated and culturally experienced, how their subject matter often requires in-depth research and awareness. That'd be an appeal to credibility. It's a classic (Aristotelian) element of argumentation meant to gain your trust by convincing you the creators of the work are worthy of your consideration. I could then apply logos, the logical appeal I played at in the previous post. And lastly, I could use pathos, the third appeal, to try to tug at your heartstrings by linking to a video of Pinkney talking about personal struggles he's overcome, or some audio of Lester discussing his ancestry, with just the right music dubbed over it to give you chills. You'd all be putty in my hands.

But when you're at a McBookstore and see a book like this on the shelf, Aristotle's appeals don't matter much, do they? What matters is that this book is in the children's books section, is big with pretty pictures on every other page, and doesn't have very many words. In the eyes of most, that means: This book is clearly for kids. 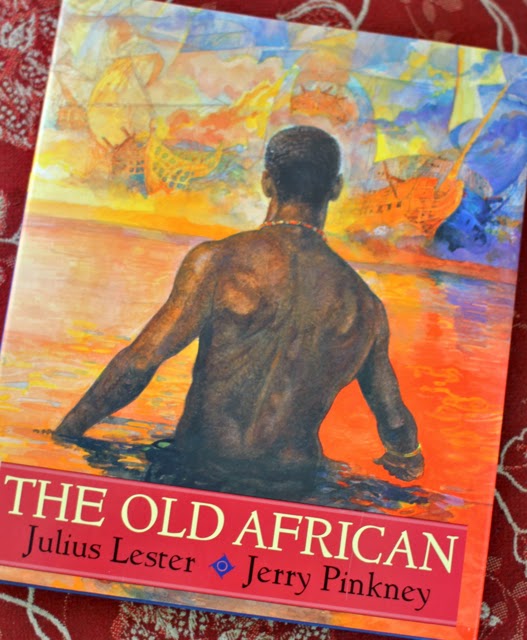 As explained by Lester in the epilogue, the story of The Old African is based on Lester's ancestry and his previous work with legends from black history. You probably know that legends play with reality but are meant to be grounded in the history we know. Their plot lines can be moving along realistically when suddenly something magical happens without anyone blinking, as if magical or supernatural abilities are part of real life. Some legends are like that--they aren't necessarily meant to be considered fantasy; instead, magic stands in the places where logic doesn't quite fit, or sometimes where the real cause of something wasn't understood; therefore magic is part of reality, not just an easy way to get a character out of a fix. Magical reality, in an old, non-Western sense, can be an actual answer, and therefore should be taken as a relatively normal (if often limited to certain enlightened or specially gifted characters) part of the reality of that world as you read. As Pinkney described it, this story has a "mythical time and space" quality to it, which means not only do supernatural things happen, but a figure may well stand as a hero in a grander sense than what happens in regular, everyday life.

The other thing to remember is that in myths and legends, what's on the page (or coming out of the mouth of the storyteller) has some specific purpose for being there, whether to pass on history and heritage, to share important life lessons, or to give some explanation for the unexplained, unfair, or otherwise unknown. In the case of this story, there is a desperate need for an answer to the question, "Who will free us, and how?"

So when you pick up this particular picture book, you'd be well-advised to approach the story knowing that it's a retelling and reshaping of an old myth about slaves who disappeared into the waters off St. Simons Island, Georgia, and with some awareness of what kind of culture, time, and place a person is in when he can close his eyes and turn into a hawk as naturally as you'd turn in for bed at night.

The Old African is about a man taken from the shores of Africa and sold into slavery, not one born into slavery, and therefore a man who remembers in great detail the experience of being taken. He works on a plantation on St. Simons Island, which is not only a five hour drive from my house, but is the place I spent many a childhood vacation staying with my aunt or my grandparents. The lighthouse, the park, the Spanish moss, the chirping Palmetto bugs, the hot days on the beach, and the baskets full of raw chicken being devoured by crabs even as they were pulled up over the railing of the pier to be put into a boiling pot and eaten that evening--this is St. Simons to me. 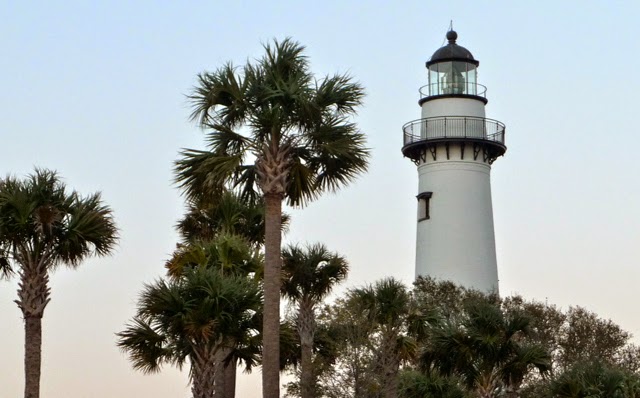 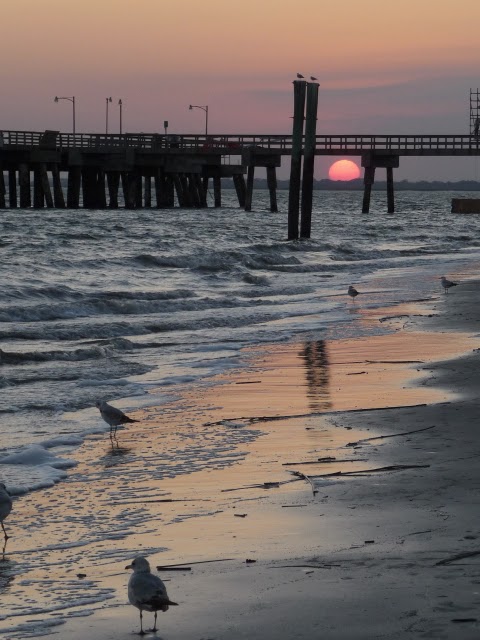 Never once, while building a castle on the beach or being thrown into the waves by my big brother, did I imagine a tide of people being dragged on shore, connected by iron shackles, naked, heads shaved, bleeding, sick, malnourished, covered in their own feces and urine, fondled by the slave traders, and carrying a light in their eyes that had turned to something flickering at best.

That's the setting of this story. There, in a cruel existence of forced servitude, the Old African has "the power." He can speak into people's minds, see into their souls, guard them from pain, and hear all of creation speak. He can turn himself into another form if needed. He can cause a storm, cause a death, cause an exodus. His hope in this story, as in so many stories throughout history, is to be free.

That's all I'll say as I don't want to give the story away. What I will do now is give examples of some of its lines, themes, and images--as I said, let the pages do the talking--so you, as an adult, can decide for yourself if there's anything you could possibly glean from what happens between the two hard covers of this book and determine whether or not it's only meant for children:

Page 7: "The whip cut into his flesh again...Master Riley had ordered his twenty slaves to watch what happened to someone who dared run away" 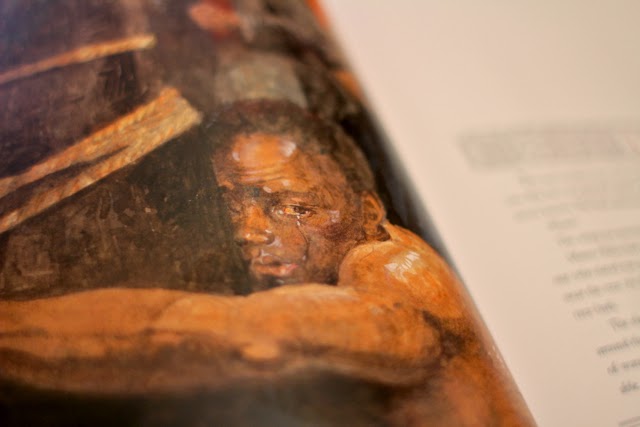 Page 8: The Old African learned "how to catch the tears of another before they fell, how to hold the hurting in a heart so it would not break."

Page 12: "I ain't got no tolerance for a nigger what runs off and don't plan on coming back." 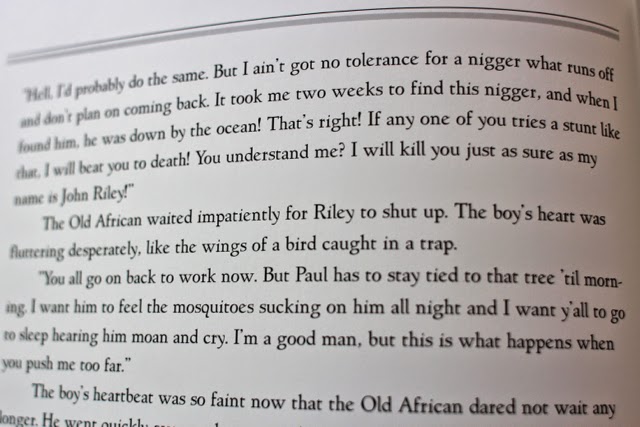 Page 24: "Jaja saw one of the lords pinch the now exposed nipple of a woman."

Page 26: "Jaja tried to imagine how he looked with more hair beneath his arms and around his penis than on his head." 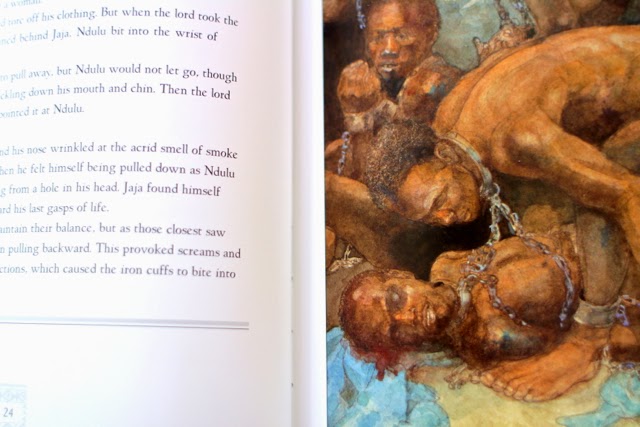 Page 36: "...he saw Ola a short distance away, a lord next to her, his hands rubbing her breasts, his mouth wide with laughter."

Page 44: "Her mouth said 'Yes, Master' and 'No, Master,' but he could tell: Her heart was saying something else."

Page 55: "Come down this afternoon and make these evil white folks know that they are sinners."

Page 70: "There on the ocean floor, as far as he could see, were skeletons, one beside the other, row after row after row, arms by their sides...who were all of these...thrown or leaped from the decks of slave ships? So so many." 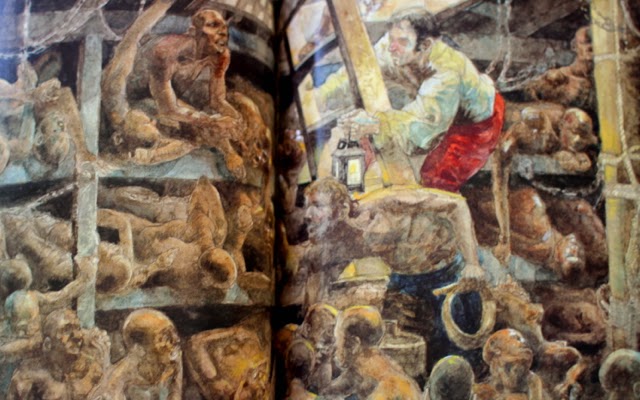 In the midst of these lines, there is more foul and disgusting language, there are murders, many commit suicide, a man is burned to death, and the Christian savior most all the slaves trust in is a coverup for the salvation one mortal man brings when God is silent.

You may be thinking, "Wait. That's cheating. You can't include a book about the slave trade because it's obviously going to have adult themes." That, my friend, does not matter, because this is a picture book in the form of a picture book, with pictures and everything. It's found in the children's section of the bookstore, is sold as children's literature, and is published by Dial Books for Young Readers, who, according to their website, publish books "for children of all ages, from preschool through young adult." And according to Publishers Weekly, it's for kids ages 9 and up. That means most adults walk right by and don't pay it any attention. That means kids are reading it. So don't go acting like I've picked an adult book packaged in a children's book format, and don't go acting like kids shouldn't read words like penis, breast, and nipple or learn why racial slurs are so hateful or read something that describes people happily killing themselves instead of sleeping in their own feces and vomit while they wait to be whipped, raped, and/or murdered when they were happily sleeping in their beds the night before. Kids know stuff. Stop acting like they don't. Instead, give them the right answers and show them how to treat people with love and respect. And stop acting like adults don't need to hear this message over and over. We have a black president, and some people hate him just for being black. We have not yet arrived. We have not fully healed.

But that's not the point. The point is: this book is a book. It's not a children's book, whatever the marketing material says, and it's not an adult book, whatever your prudent sensibilities might say. It's just a book. A book with moving words, award winning artwork, and something important to say that can help us be better toward one another.

So thank you, Lester and Pinkney, for writing a book. It's awful, it's beautiful, and we can connect with it. Mission accomplished.

"Some think of me as a writer of children's books,
while others know me for the adult books.
I think of myself as simply a writer."
- Julius Lester 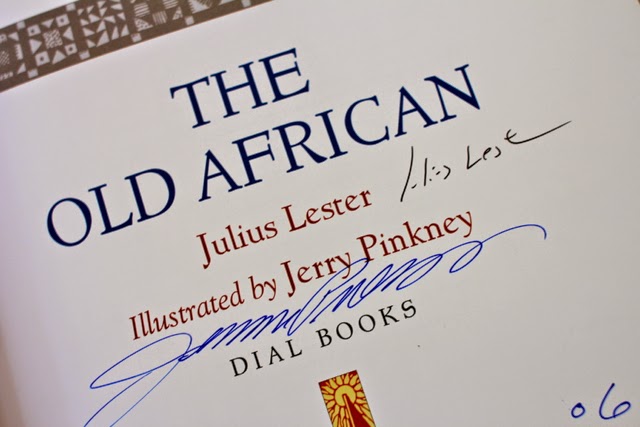