Previously, I posted about how taking adventures, even small ones, adds to a writer's basket of ideas, characters, and settings. Having just returned from an adventure in Scotland, I've realized travel can do one better: it can help us see what was in the basket we already had.

For example, breakfast. This morning, I made two buttery scrambled eggs. Not poached, not half-boiled, not fried, not ordered from a friendly b&b owner--they were scrambled by me in my jammies in my modern Ikea kitchen on a bright, unusually cool morning near Atlanta, Georgia, not in the Highlands of Scotland where the sun has been up since 4am and didn't set till midnight. Georgia, where pecan trees give shade and the yard, not the garden, slopes down prettily, which I can see through the row of windows across the front of the house that bring in the sun or the moon, whichever happens to be shining. 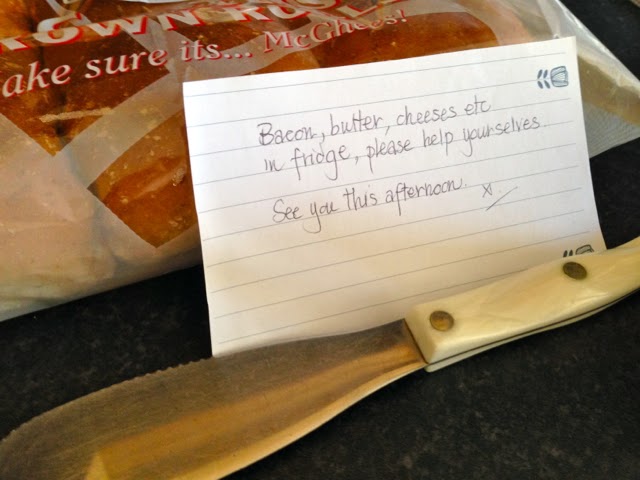 Breakfast instructions left for us by our friend and perfect host, Carol, in Edinburgh

Along with the eggs, I had a thin slice of rye toast. Not white, not brown--it was dill rye bread from the Kroger deli a mile and a half away, which we didn't walk to, though we could have, because the roads are dangerous where there aren't sidewalks. We drove in one of our two cars that are both Hondas and automatics, not manuals. Jonathan would like them to be manuals, but the traffic here is London minus the roundabouts plus road rage and the occasional concealed weapon, so automatics are safer, in my opinion. Don't ask Jonathan--he doesn't know what he's talking about ;)

With the eggs and toast, I had slices of a just ripe banana and a handful of too-tart blueberries, and that was breakfast. No tea. No coffee. No juice. 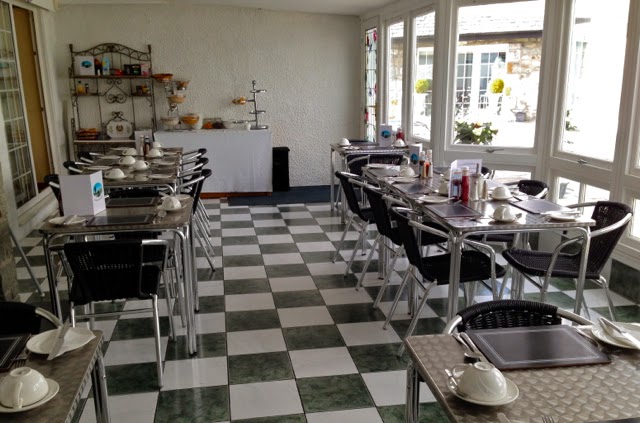 The breakfast room at the beautiful Culag Guesthouse in Loch Lomond

The fruit wasn't in its own bowl and I didn't use a spoon to eat it. All the food went together with a fork on a big black dish that's curved just a bit too much, making it more a bad bowl than a good plate. I loved these dishes when we got married. We registered for them at Target. They don't sell them now. I suppose they're not trendy anymore. I prefer classic looks, but didn't know that when we got married. What I'd like now are heavy, plain white dishes that are pretty but made to do the job well, and while we're at it, a set of silverware that's heavy too, and has proper soup spoons. Eating soup takes forever with the ones we've got.

Yes, at my age and disposition, things like the size and weight of a spoon have come to matter. Before, that would have made me sad. What kind of boring old woman cares about spoons? Now I know it's nothing to do with age or interestingness and everything to do with knowing one's own mind and direction, and, more importantly, knowing what a good spoon is like. But we won't buy new dishes or cutlery for a long time because what we've got is good enough. (Now that was a boring old person talking, however true.) 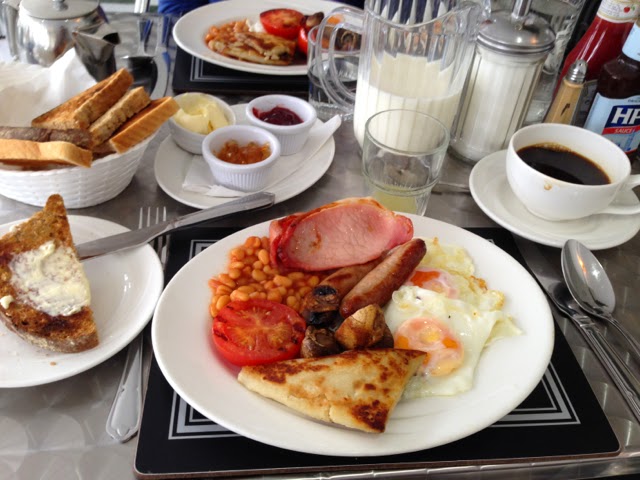 Instead of sitting like a lady making conversation with others at the table, especially since there were no others, I hiked up my sleeping pants, crossed my legs under me on the couch, put my plate on top of them, pulled up my laptop table, and started an episode of Friday Night Dinner to keep me company. I like noise. I know we're supposed to be mindful these days--savor each bite, thoughtfully contemplate the day ahead, be whole in oneself without needing distractions and make sure to take a picture and show everyone online how pleasant our quiet breakfast was so we seem like interesting, independent people. But growing up, there were six of us (at least) in the house at one time, the television was always on somewhere in the background, and there was a busy road out front. It's not that I don't like the quiet. It's not that I need distractions. It's that noise is comforting. It's evidence of life. It's a reminder that I'm only a small part of something gigantic, and that gigantic thing includes cheap laughs. 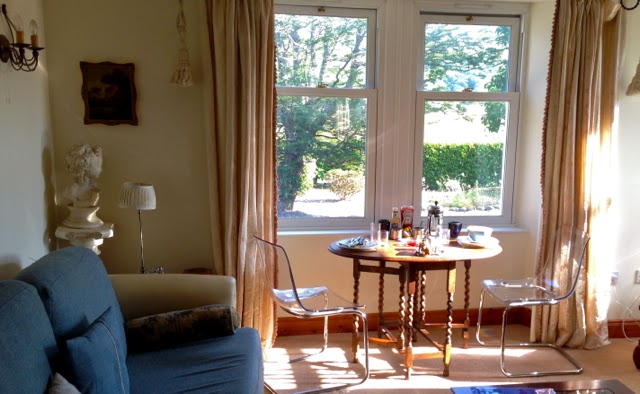 So with Harvey at my feet, whining for another bite of banana, I smiled at the telly, ate my food, and took a call from Jonathan. He was just getting to work and noticed some school traffic picking up again. It'll be autumn soon, we keep saying. Just yesterday we saw Halloween costumes in Costco. 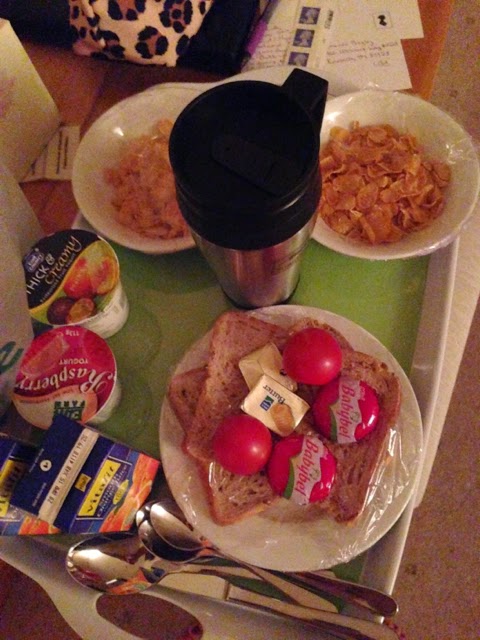 5am departure breakfast by our thoughtful hosts in Orkney

Everyone says we should write what we know, but it's hard to know what we know--what's different, what stands out, what matters and why, what makes us peculiar, what makes us us--without some comparison. This can come from traveling abroad or from simply having breakfast at someone else's house. Is their television on? Do they set the table? Is it only because you're there, or do they always? Do they use the same spatula for the sausage as they do the eggs? Do they use oil or butter? Cheese with breakfast, or no? Rolls or biscuits? Jelly or preserves? 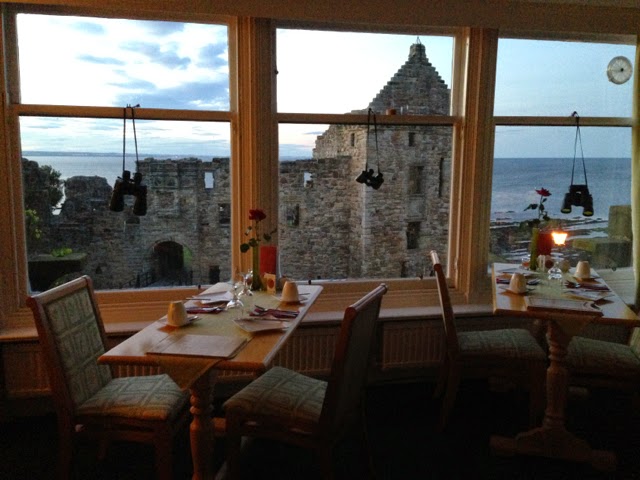 View from the breakfast room in St Andrews

When I read, I connect with two things: the universals and the particulars. I want to first know that the journey is one I have or could have experienced, and the person on that journey is one I'm cheering on, in all her faults. That connection is vital. But then I want to know how she makes a grilled cheese sandwich, whether or not she wears baggy clothes or fitted ones, how often she replays an embarrassing moment in her mind, if it's cold where she is, if there's a place in the woods behind her house that only she knows about, and if her spoons aren't much worth eating soup with. In other words, what makes her her. What makes her individual.

Yes, the story is in the plot, and the plot should at the very least be a hazy curved line for readers to follow, but the meaning, the voice, the personality, the movie we see and feel in our heads and hearts as we read--that's in the details. As writers, delivering a world we intimately know is often easier when we compare it to a world we didn't. 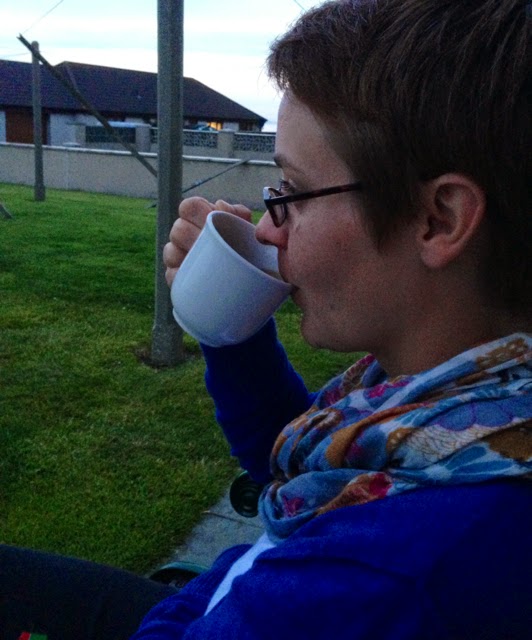 "'When you wake up in the morning, Pooh,' said Piglet at last, 'what's the first thing you say to yourself?'

'What's for breakfast?' said Pooh. 'What do you say, Piglet?'

Pooh nodded thoughtfully. 'It's the same thing,' he said."